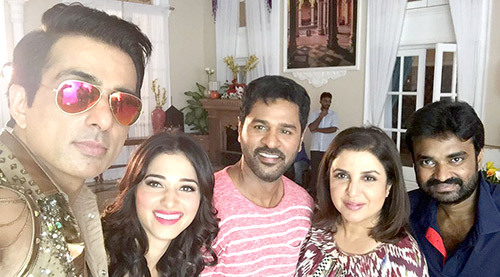 Choreographer turned director Farah Khan who made her acting debut with the Bollywood film Shirin Farhad Ki Toh Nikal Padi recently was in the news for choreographing a song sequence in the Jackie Chan film Kung Fu Yoga. Well now we hear that Farah is all set to make her Tamil debut with the trilingual film Devi.

In fact Farah Khan recently even shot for the film and even shared an image from the sets on twitter saying, "Such fun shooting a cameo for n with my talented friends @SonuSood @PDdancing @tamannaahspeaks n director Vijay..." Replying to her tweet dancing legen and maverick director Prabh Dheva tweeted, "@TheFarahKhan thanks for the cameo had super fun!"

Devi which is being directed by A L Vijay of Thalaiva fame will be releasing in Hindi, Tamil and Telgu. As for Farah's role in the film, the sequence required a known Bollywood choreographer. As for the film, Devi that features Prabhu Dheva, Sonu Sood and Tamannaah Bhatia, has been co-written by popular Hollywood filmmaker-writer Paul Aaron. Said to feature music by S Thaman and GV Prakash Kumar, the film is produced jointly by Prabhu Dheva, Kona Venkat, and M.V.V Satyanarayana and is slated to hit the screens in July 2016.