Each day there are a number of events, screens, and celebrity spottings across the city. If that wasn’t enough, most of the celebrities are also rather active on social networking sites, sharing updates and images from their shoots, parties, events, or launches. Well, with so much happening it is rather difficult to keep track of the trending topics and images, keeping this in mind Bollywood Hungama brings to you some of the top trending pics from Bollywood. Ranging from, Suhana Khan, Aryan Khan, Ananya Panday, Shanaya Kapoor, and others arriving at Ritesh Sidhwani’s party for Farhan Akhtar and Shibani Dandekar to various celebrities attending the special screening of Alia Bhatt’s Gangubai Kathiawadi. 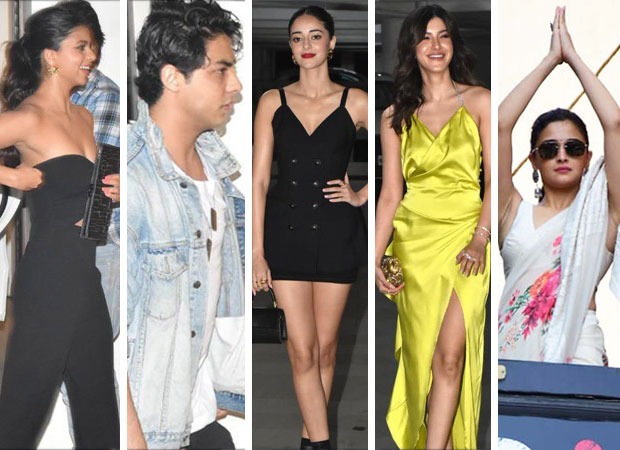 Suhana Khan, Aryan Khan, Ananya Panday, Shanaya Kapoor, and others arrive in style at Ritesh Sidhwani’s party for newlyweds Farhan Akhtar and Shibani Dandekar
Farhan Akhtar and Shibani Dandekar who tied the knot last Saturday in Khandala continue to celebrate their union. The couple had an intimate wedding in the presence of family and close friends. After the wedding, Farhan's sister Zoya Akhtar had hosted a party for the couple at her residence. On Thursday, the couple attended another wedding bash hosted by Farhan's business associate and close friend Ritesh Sidhwani. The party was also attended by several Bollywood celebrities. Click here for More.

Salman Khan has an adorable moment with his nephew and niece as he tries to make them dance to Race 3 song at the rehearsals of the Da-Bangg tour in Dubai; watch
Superstar Salman Khan is all ready to set the stage on fire with his performance at Dubai's Expo 2020 on Friday, February 25. The star-studded tour performance will be taking place at Dubai Duty-Free Tennis Stadium. This year joining him for the Da-Bangg tour are Sonakshi Sinha, Pooja Hegde, Disha Patani, Aayush Sharma, Guru Randhawa, Saiee Manjrekar, Kamaal Khan, and Maniesh Paul. Watch video Here.

Photos: Alia Bhatt takes a bus ride to celebrate the release of the much-awaited film Gangubai Kathiawadi
The much-talked-about Alia Bhatt starrer Gangubai Kathiawadi was released today. Receiving positive reviews and feedback from the critics the film opened on a good note. Celebrating the release of the film Alia Bhatt was snapped at a suburban multiplex meeting and greeting fans with the trademark Gangubai Namaste pose. If that wasn’t all, Alia also took a bus ride around the area waving to fans and greeting them as well. See Pics.