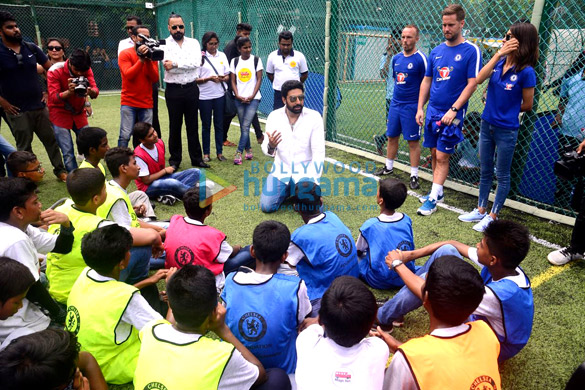 While the weekend was a glamorous one with celebs busy attending Diwali parties, Abhishek Bachchan was seen taking time out to follow the passion for his favourite sport football. The actor, who is an ardent follower of football leagues especially FIFA, was recently spotted promoting his favourite team Chelsea and even spotted bonding with the kids.

Abhishek Bachchan dropped by at the grounds of Mumbai, this weekend where he not only launched the new jersey of Chelsea but also interacted with the students learning the sport. According to the Chelsea website, the actor was seen during the morning session which had about 60 local children. About 40 local coaches too joined them to teach them more about the sport on the same day.

Amidst them, Abhishek Bachchan too answered several questions of these aspiring footballers. Interestingly, the actor is the captain of the ASFC, the All Stars Football Club in Mumbai which involves players from the Bollywood as well as television fraternity.

Besides football, Abhishek Bachchan also is equally involved in kabaddi and also co-owns the team from the league. On the film front, the actor will next be seen in Bachchan Singh to be directed by Priyadarshan.