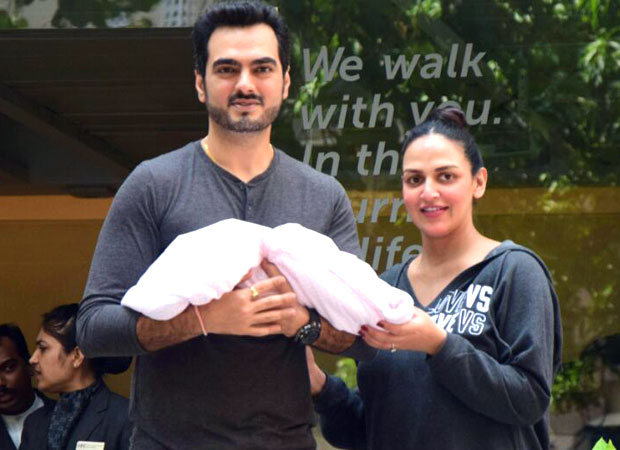 Esha Deol, who had announced her pregnancy in the month of April earlier this year, gave birth to her first child, a baby girl in the wee hours at Hinduja Hospital, Mumbai on Monday. Post the birth, Esha Deol, Bharat Takhtani and his entire family came outside of the hospital and posed for the shutterbugs.

Now, the couple has officially confirmed that Esha Deol and Bharat Takhtani have decided to announce the name of their newborn baby girl as Radhya which is derived from Radha, which means to be worshipped. "We are very happy to announce that our daughter will be named as Radhya Takhtani. The name has been jointly decided by Esha and me," says Bharat Takhtani.

Grandparents Hema Malini, Dharmendra and Takhnanis are extremely happy with the 'divine' name. Takhtani's will now have a formal naming ceremony in a week's time.

Esha Deol and Bharat Takhtani thanked the media fraternity for the love and blessings. "She has been showered with messages from the film fraternity. She would like to thank all her fans on social media who wished and made beautiful creatives for Esha and Radhya," added Bharat.

Currently, Esha Deol is enjoying her time with baby Radhya and trying to become a hands-on mommy.

On the work front, Esha Deol was seen as a host in Roadies X 2 and film Kill Them Young in 2015.

EXCLUSIVE: Shimla Mirchi to release in…