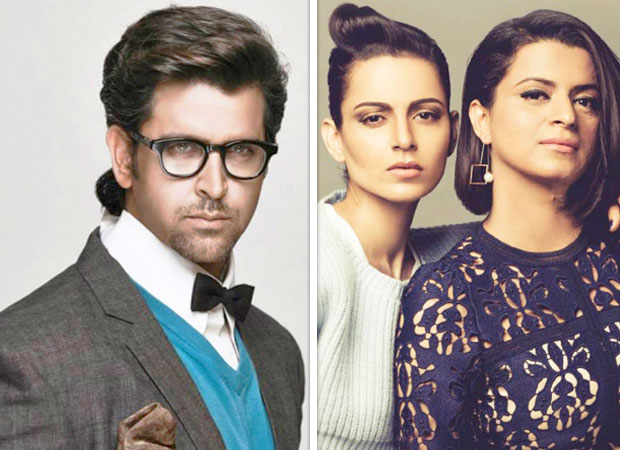 The Kangana Ranaut - Hrithik Roshan controversy has gone to another level altogether. Over the past few days, some shocking details have come into the limelight when a news channel made Hrithik Roshan's last year's 29-page complaint public. The complaint was as a part of the annexures by his lawyer Mahesh Jethmalani with the Mumbai Police where a set of explicit emails from Kangana Ranaut were attached. In the entire complaint, Hrithik claimed that his relationship with the actress was strictly professional and that she was stalking him.

Just after the complaint release, a set of emails of Kangana Ranaut was made public where Kangana, in detail, talked about being in a relationship with him and even mentioned several other actors from the industry.

On Thursday afternoon, Hrithik Roshan issued his first ever statement since the controversy had begun around his alleged affair with the Queen actress. In the detailed post, he had reacted to relationship allegations and maintained his stance that he had never met her one on one ever in life besides working with her films- Kites and Krrish 3. From the leaked emails to engagement in Paris to cosy picture with Kangana, Hrithik Roshan talked about everything without even mentioning her once in his statement.

It has only been a few hours since Hrithik Roshan has created storm with his sensational statement. While everyone was talking about the statement, Kangana Ranaut’s sister Rangoli Chandel has once again taken the charge and has lashed out on Hrithik. From calling him a ‘creep’ to having multiple affairs, Rangoli did not spare him. She even made a shocking revelation that Hrithik was suffering from depression and also had suicidal tendencies post his brain surgery in 2014. She further added that he was reportedly in therapy with life coach, Afreen Khan. While Hrithik Roshan said that he had submitted his phones, laptops etc, Rangoli said that he had no submitted his Ipad.

Not only this, Rangoli Chandel also released an email which is reportedly Hrithik Roshan’s reply to Kangana Ranaut’s emails. The letter read, “Saw the email flood, and I don’t blame you at all. I am a little occupied so could not reply. Our life’s different, unlike other couples :) I so wish it wasnt the case, but sadly that’s how it is. Bear with me, as I emerged through all this with a clean slate, start afresh with new memories to be made. P.S. I did see the video, and it was such a tease! I wanted so much more, but dint say anything since you were unwell,” the letter ended. The email ended with the footnote, “Sent from my iPad.”

Rangoli also shared the picture of Kangana Ranaut and Hrithik Roshan together at a party which was earlier leaked during the legal battle. Around that time, Hrithik’s ex-wife Sussanne Khan had supported him and dismissed the photograph with the original stating it was photoshopped and that even she was present at the party. Rangoli also took shots at Sussanne Khan for allegedly having an affair at the time as well.

Here are all the tweets:

This is the same private forensic report Hrithik paid for in 2016, police investigation report says No Imposter. https://t.co/g4sfVXVkyX

....But I can give plenty of proofs of Hrithik's skull drilling brain surgery in 2014... @TeamMissMalini @pinkvilla @bollywood_life

Hrithik gave his laptop for private forensic investigation which he paid for not his I pad... any guesses why ?? ???????????? https://t.co/g4sfVXVkyX

In your statement you said Kangana released a photo shopped picture. @iHrithik

If u are talking about this picture we don't know who released it but what do you mean by photoshop? @iHrithik pic.twitter.com/KJT7GYRIhm

Is dat not u, who has grabbed Kangana's waist like a creep and smelling her neck, who seems disinterested? @iHrithik pic.twitter.com/I7YrLrEg6C

So what if ur ex wife ws dere, I don't knw bt we all read rumours about hr affair with your friend. Pls prove dis is photoshopped @iHrithik

Could your wife stop you from having multiple affairs under her nose? Why you always hide behind her? @iHrithik

Everyone who accuses Kangana for calling him a silly ex....

....and starting it all should know that for months Hrithik's PR maliciously spread fake news like Kangana pinning over him....

.....Hrithik kicking Kangana out of projects, Kangana being replaced on Hrithik's insistence etc.

In 2016 Hrithik said there is an imposter who is fooling Kangana and my target is the imposter not Kangana.

...Hrithik changed 3 lawyers and his stance also, now Kangana is mentally ill and his new target , not the imposter.

My question 2 Hrithik is u hv 2decide one thing if Kangna ws foold by ur impostr den she didn't imagine....

...and if she imagined then there was no imposter. #chooseone

Prove one thing don't keep changing lawyers and stance. And Brainless paid trollers are not goin to help.

Meanwhile, Kangana Ranaut had not yet spoken anything since the leaked police complaint, emails and Hrithik Roshan’s statement has been released.