Do you remember how Ranbir Kapoor confessed on being a Madhuri Dixit fan? Well, the Gen Y heartthrob had a dream of dancing with the diva. And he fulfilled it in his blockbuster film Yeh Jawaani Hai Deewani. He shook a leg with the actress in the famous dance number ‘Ghagra’ from the film. Now, it is time for Ranbir Kapoor to do a cameo in a Madhuri Dixit film. And he will be doing this special appearance in the actress’ Marathi debut Bucket List. 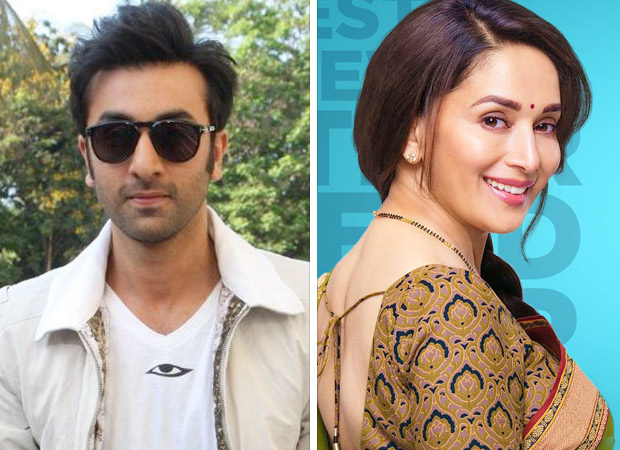 For the past few days, Madhuri Dixit has been in news for her film Bucket List. The film marks her acting debut in her mother tongue Marathi. The actress, who is leaving no stone unturned for this film, is obviously thrilled to see her YJHD star doing this guest appearance in her film. Interestingly, she too appeared in a friendly appearance for Ranbir’s Yeh Jawaani Hai Deewani which also starred Deepika Padukone as the leading lady. Looks like it is a cameo for a cameo!

On the other hand, if reports are to be believed, Ranbir Kapoor was more than happy to share screen space with his favourite actress. He immediately agreed to do the same when he was approached for a small role in Bucket List. However, the details of his role are yet to be revealed. These reports suggest that Ranbir has already shot for the role.

Incidentally, Bucket List too will see the trio of Karan Johar, Ranbir Kapoor and Madhuri Dixit coming together. For the uninitiated, let us tell you that Karan will be co-producing this film, thus making it his first Marathi production.

Speaking on Bucket List, the film is a slice-of-life film of a house wife who wants to explore everything that is on her bucket list. Directed by Tejas Deoskar, the film is slated to hit the theatres this summer, on May 25.