Shahid Kapoor, whose last release Padmaavat earned him accolades for his performance, is currently busy with the shooting of Batti Gul Meter Chalu. The film, which stars Shraddha Kapoor opposite him, is currently on its second schedule. Meanwhile, there were speculations that Shahid has come on board for the Hindi remake of the Telugu blockbuster Arjun Reddy. However, the actor was mum about his involvement. Now, it is confirmed that he is indeed doing the project. 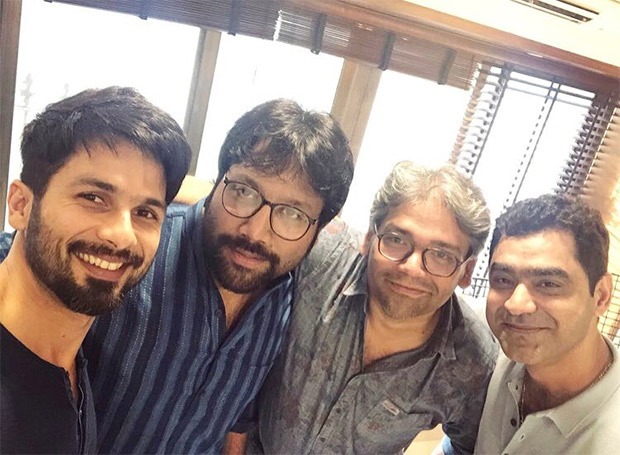 Shahid Kapoor took to his social media where he shared a picture with the team of Arjun Reddy. In the picture, one can see the producers Murad Khetani, Ashwin Varde, and director Sandeep Vanga. He captioned the picture, “Team ARJUN REDDY is READY !! Here we go. Wish us luck guys. @imvangasandeep @MuradKhetani @ashwinvarde."

The original film Arjun Reddy, that tells the tale of an alcoholic, featured Vijay Deverakonda in the lead role. The female lead is yet to be finalized in the Hindi remake. It seems like Shahid will reportedly essay the role of an alcoholic in this film. The original story revolves around a surgeon grappling with anger issues who goes into a downward spiral after his girlfriend gets married to someone else.

On the other hand, Shahid Kapoor will be seen as a lawyer in Batti Gul Meter Chalu alongside Shraddha Kapoor and Yami Gautam. Directed by Shree Narayan Singh, it is a social comedy-drama that gives a quirky take on the conspiracy behind exorbitant electricity bills.