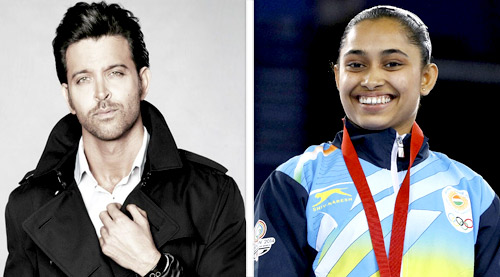 Dipa Karmakar from Tripura, the first Indian female gymnast to qualify the final vault in Rio Olympics and who narrowly missed out on the bronze medal won many hearts in the country. While the entire nation expressed their pride over her talent, when asked if she is a fan of someone in Bollywood, she replied that it was Hrithik Roshan.

In one of her recent media interactions post her stint at Rio Olympics, Dipa Karmakar expressed that she is a huge fan of Hrithik Roshan and that she loves the way he dances. She also added that she is keen on watching his recently released film Mohenjo Daro. On the other hand, Hrithik Roshan, being an ardent sports lover, couldn't stop praising about Dipa. In fact, the actor was closely following the Olympics and maintained that he is super proud of Dipa.

When contacted Hrithik Roshan he said, "I am honored. But I think I am the bigger fan her. The spirit with which she played, she won all our hearts. At the same time she seems so unassuming sweet and vulnerable in her demeanor. She helped me drive home the point I keep making to my kids that the most important thing is not to win but to give your 100% which she did."