The pandemic brought the theatres to a standstill earlier this year. This led to a delay in the release of some of the most awaited films. However, eventually big ticket films made their way to OTT platforms for a direct-to-digital release for people to enjoy films at the comfort of their home. Google India has now released its year ender for 2020 revealing which films were being most searched on their platform. 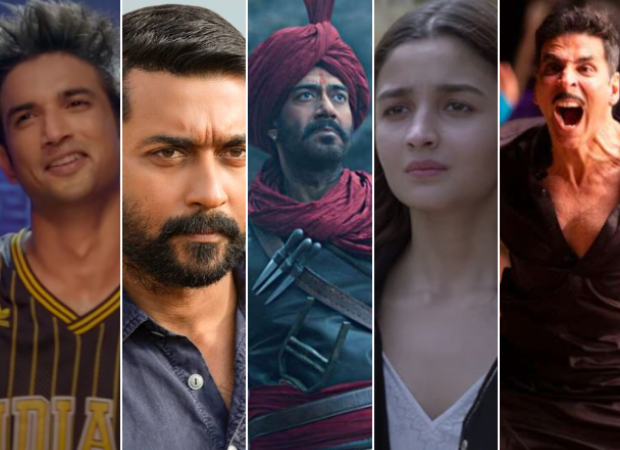 Dil Bechara, Soorarai Pottru, Tanhaji, Sadak 2, Laxmii among the most searched films on Google in 2020 in India

Here's the top 10 most searched films:

The film which marked Sushant Singh Rajput's last film was released a month after the actor's demise on Disney+Hotstar. The film broke viewership records for any OTT platform back then. The film, which is a remake of the Hollywood classic The Fault In Our Stars marked the debut of director Mukesh Chhabra and actress Sanjana Sanghi.

This Tamil film led by Suriya and Aparna Balamurali was one of the most anticipated films of the year. When it was announced that it would be skipping the theatrical release, fans were disappointed, but was declared a hit after its OTT release. The film is inspired by the story of Captain GR Gopinath who introduced low cost passenger planes.

Released in the first week of 2020, the film was a massive hit. Directed by Om Raut and starring Ajay Devgn, Kajol and Saif Ali Khan, the film narrates the story of the Maratha warrior Tanhaji Malusare, a trusted lieutenant of Chatrapati Shivaji Maharaj.

Headlines By Vidya Balan, the film directed by Anu Menon is the story of the late mathematician Shakuntala Devi and her relationship with her daughter . The film was released on Amazon Prime Video and also stars Sanya Malhotra, Jisshu Sengupta and Amit Sadh.

Starring Janhvi Kapoor the film is an inspirational tale based on the life of IAF officer Gunjan Saxena. She is the first of two women along with Flight Lieutenant Srividya Rajan from the IAF to enter a war zone flying Cheetah helicopters.

Laxmii was Akshay Kumar's first release this year. The film which was supposed to hit the theatre in May, released on Disney+Hotstar during Diwali. The film which is a remake of the Tamil film Kanchana saw Akshay Kumar play the role of a transgender.

Directed by Mahesh Bhatt, the film is a sequel to the 1991 film Sadak starring Pooja Bhatt and Sanjay Dutt. Despite having a star cast including Sanjay Dutt, Alia Bhatt and Aditya Roy Kapur, the film failed to impress the audience. Sadak 2 was released on Disney+Hotstar.

Third of the Baaghi franchise, it reunited Shraddha Kapoor and Tiger Shroff who were paired opposite each other in the first part. This out-and-out action film was much appreciated by the audience , but unfortunately had a short run in the theaters because of the COVID-19 induced shutdown of theatres in mid-March.

Directed by Sam Hargrave, the film starring Chris Hemsworth was released on Netflix amid the pandemic. The film also starred Indian actors Randeep Hooda and Rudhraksh Jaiswal. It became the most watched original film in Netflix's history, and a sequel is in development.

Amitabh Bachchan and Ayushmann Khurrana starrer was a quirky comedy. The film narrates the story of an old man at war with his tenant as he wants him to evict his house but the latter refuses to budge.