It seems that the Me Too movement has taken a new turn in the South industry. While veteran actors have made some unpleasant comments regarding the movement in the past, the trend continues with Radha Ravi this time. Despite being one of the biggest stars in the industry, Nayanthara had to face some offensive comments at the trailer launch of her own film Kolayuthir Kaalam. While the actress is yet to respond to the same, she fortunately found support amongst her colleagues including Radha Ravi’s sister Radhika. Moreover, Badla actress Taapsee Pannu too came out in support of the Tamil actress. 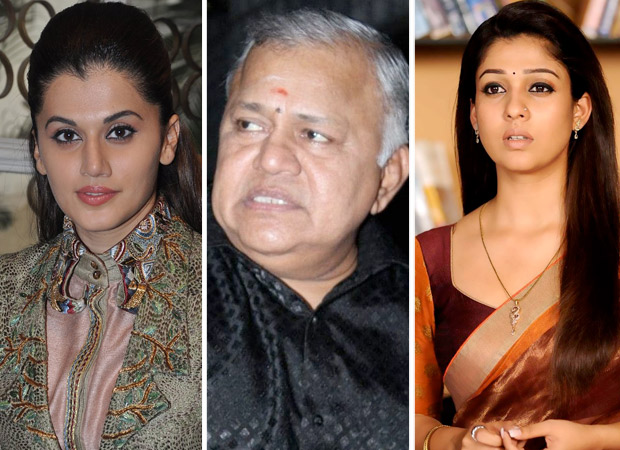 It is a known fact that Taapsee Pannu is quite popular down South too. While she started her career with this industry, the actress has also honestly put forth her opinions and thoughts without inhibitions in the past, even if it is against the industry. This time around too, she came out in support of her fellow colleague Nayanthara by slamming the veteran actor Radha Ravi for making such judgmental comments against the Kolayuthir Kaalam actress.

Radha Ravi had said during the trailer launch of the film that, “Nayanthara plays a ghost also and Sita also. There was a time when we everyone used to search for actresses like KR Vijaya to play the role of a goddess. But now, anyone can play God. People who come across as someone we would like to pray to can also play that role [of a goddess] and people who you will call towards you can also essay the same role.” His comments obviously didn’t go down well with any of the actresses and everyone including Taapsee Pannu slammed him on social media.

Taapsee Pannu questioned as to who gave Radha Ravi the right to decide the character pre requisite for a film. She said, “This is disgusting beyond words. Who asked him about casting pre requisites and is he the president of character certificate association? This comes for one of the strongest actresses of the industry; I can only wonder what he might have to say about others.”

This is disgusting beyond words. Who asked him about casting pre requisites and is he the president of character certificate association? This comes for one of the strongest actresses of the industry,I can only wonder what he might have to say about others https://t.co/tFjTZ04gRB

Besides her, the other actress who came out in support of this was Radhika, who is the sister of Radha Ravi. The actress stated on Twitter that she did tell her brother that the comment was made in bad taste.

Nayanthara is one of the few dedicated actors we hav today, have the pleasure knowing her and sharing professional space with her, she is above all this, did not watch full video , but met Ravi today and told him it was not in good taste at all. https://t.co/zTUVSa4fWC