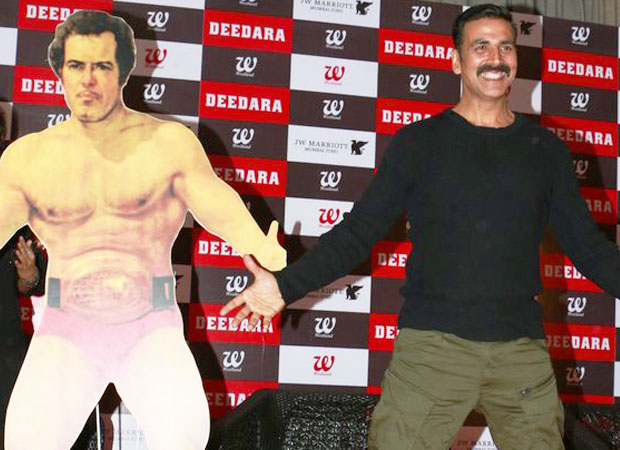 With the onscreen adaptation of real life wrestling drama Dangal’s release date right around the corner, yet another actor who wants to play wrestler on screen is none other than the very fit Akshay Kumar. The superstar who was recently present at the book launch of Dara Singh’s biography ‘Deedara aka Dara Singh’ along with the wrestler’s son and actor Vindhoo Dara Singh expressed his desire to play Dara Singh on screen.

During the event, Akshay Kumar revealed that he wants to play Dara Singh but he would require two years of intense and rigorous training for the same. Elaborating on it, the actor added that he would have to build up a broader physique and for the wrestler’s body he will need to expand a lot more on the chest side in order to justify the role completely.

It is a known fact that Akshay Kumar signs over two to three films a year and it is difficult for the actor to concentrate and dedicate so much time on building a physique for just one film. However, Akshay added that he would be ready to take up something so time consuming only if he doesn’t have too many films lined up. He also mentioned jokingly that he will be able to do the film only if Vindoo requests him to.

Last seen in Rustom, Akshay Kumar is currently juggling between Jolly LLB 2 and Toilet - Ek Prem Katha, both of which is slated to release next year.