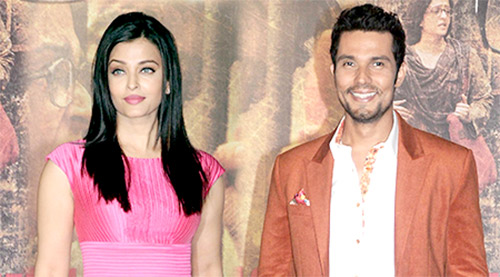 They play loving siblings on screen for Omung Kumar's Sarbjit, the real-life saga of Sarbjit Singh who was incarcerated in Pakistan for alleged espionage, and his sister Dalbir's 23-year long struggle to get him freed.

In reality the two apparently couldn't see eye to eye on many issues. Relations between the two actors deteriorated to the degree that they were barely on talking terms during the shooting.

Says a source from the unit, "Mrs Aishwarya Rai Bachchan and Randeep Hooda didn't get along at all during the shooting. They hardly spoke with one another. She was reluctant to attend public events related to the film with Randeep. For the music concert of the film earlier this week Aishwarya M'aam refused to show up."

The excuse for her absence from the musical promotion was jetlag after her Cannes visit. But the truth, says the source, is that she did not want to share a public platform with Randeep Hooda.

This is a strange deadlock for Aishwarya to arrive at. Normally she is known to get along very well with her co-stars. In fact during Sarbjit she bonded quite cordially with Ankur Bhatia who plays her husband, Darshan Kumaar who plays a Pakistani lawyer and Richa Chadha who plays her daughter-in-law.