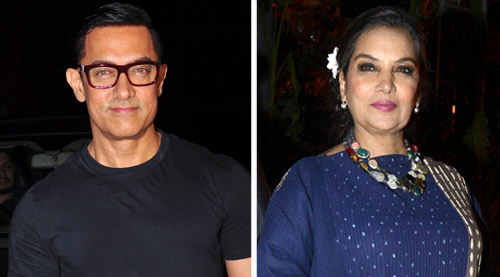 Though the next Aamir Khan starrer Dangal is 3 months away from release, the film is ready and complete. Thanks to the actor's commitment to getting it right before moving on to his next project, namely The Thugs Of Hindostan.

On September 18, Aamir Khan had the first screening of his film for handpicked guests. And the verdict was unanimous. Aamir Khan has another grand winner on his hands.

Says a source, "It was premature to show the film considering Dangal releases during Christmas. But, it was a special occasion on Sunday. It was Shabana Azmi's birthday. Aamir Khan and his wife are very close to Shabana and Javed saab. So, Aamir Khan sportingly arranged a screening attended by Shabana Azmi, Javed Akhtar and around 20 other very close friends of Aamir Khan."

Apparently, the elite guest list was blown over by the film's theme of women's empowerment.

Says a source, "It is not a film about wrestling like Sultan. It's about a wrestler's efforts to train his daughters into wrestling. It's very different from Sultan. And, very heart-warming. At a time when cinema like Pink and Parched address themselves to the question of women's empowerment, Aamir's Dangal will show him to be a true champion of feminism."

Shabana Azmi says she is bowled over by the film. "Dangal is brilliant. Another blockbuster from Aamir Khan. It is a heart-warming story beautifully scripted with very convincing performances. The girls are wonderful and its Aamir Khan's best performance to date. The gender politics are so relevant for the times and the unexpected climax will make even the most hardened heart cry. It is emotional without being sentimental. Congratulations to writer - director Nitesh Tiwari and the whole team. It's a hundred percent winner."