ZEE5 has been consistently presenting content across languages and genres with films like Chintu Ka Birthday, Pareeksha, Mee Raqsam, and Atkan Chatkan to name a few. Now, the largest original content creator in India brings you four one-of-a-kind love stories under the name Forbidden Love. With Arranged Marriage & Anamika releasing on the 9th September 2020 and Rules of the Game & Diagnosis of Love releasing on 24th September2020. Each feature film will portray the true faces of people in different circumstances. 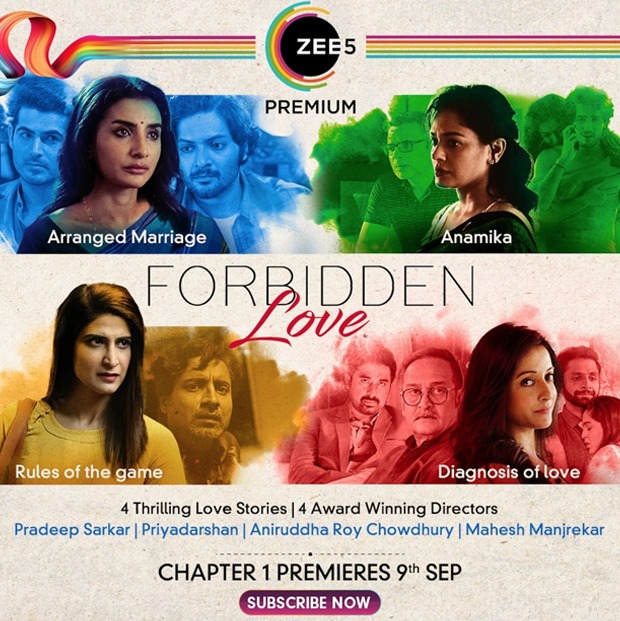 First on the list is Arranged Marriage which is directed by Pradeep Sarkar. The film has a lead star cast of Ali Fazal, Patralekhaa, and Omkar Kapoor. This thriller feature film explores relationships between its protagonists Dev, Neel, and Keya. Love will be beautifully explored by touching upon relationships and families that are involved in the marriage. The film is all set to release on 9th September 2020.

Secondly, Anamika is set to release on 9th September 2020 which is directed by Priyadarshan. The film has a phenomenal star cast of Aditya Seal, Pooja Kumar, and Harsh Chhaya. This Romantic drama narrative revolves around Anamika who is a quintessential Indian housewife and an efficient employee at a cafe. However, she is deprived of love from her husband due to his ever-irritated behaviour. But a guy comes along and what happens next will turn the narrative of the story.

Next is Rules of the Game directed by Aniruddha Roy Chowdhury. The film has a lead star cast of AahanaKumra, Chandan Roy Sanyal, and Anindita Bose. This thriller's narrative revolves around a couple in their thirties who decide to spice things up in their marriage by indulging in role-playing. But their relationship finally breaks instead of getting ignited. The film is set to release on 24th September 2020.

Diagnosis of Love is directed by Mahesh Manjrekar. The film has a star cast of Raima Sen, Mahesh Manjrekar, Rannvijay Singh, and Vaibhav Tatwawaadi. The crime thriller revolves around a blooming love story between a surgeon and a patient. The film is all set to release on 24th September 2020.

Director Pradeep Sarkar expresses, Arranged Marriage exposes the flaws in this age-old tradition of Indian matchmaking where love and relationships are sacrificed for superstition and rigid family beliefs that no longer serve us. It is a modern day take on a Love Story. I’m glad the film is getting a global release with Zee5 giving it the voice and visibility it deserves. Looking forward to the audience response.

Director Priyadarshan reveals, “Anamika is a quintessential housewife in her late 30s, but her love life is a bit dry with negligible attention from her husband. This slice of life romantic drama is an everyday story of a lot of middle-aged women wanting a bit of love and Anamika is their mascot. The film has a relatability factor which I hope the audience will connect with. Desire will take center stage and the story is a visual representation of it and I hope the audience enjoys watching it. Premiering 9th September on ZEE5.”

Director Aniruddha Roy Chowdhury shares, “The film Rules of the Game is about a couple in their 30s wanting to add a bit of spice in their relationship. I believe it’s a constant struggle in any monogamous relationship to keep the romance quotient high. I am sure many of you in this generation will relate to the film in some form or the other. The millennials aren’t foreign to the art of role-playing, but what if it takes a wrong turn? It’s a fun, thrilling ride for the audience and I can’t wait for the premiere on ZEE5.”