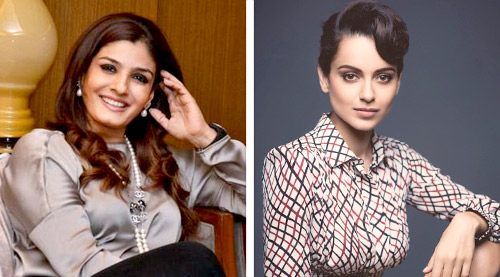 Even though the Hrithik Roshan-Kangna Ranaut scandal maybe on its way to gradually fizzle out, there comes a support recently in the form of Raveena Tandon, who has always been known for speaking her voice out.

In her blog, Raveena Tandon gave a pat on Kangna Ranaut's back for exhibiting immense courage during turbulent times, by stating, "Today, Kangana Ranaut is the topic - she has become a poster girl for feminists. I remember first seeing Kangana when she won the newcomers' award at an award show in London many years ago. What really impressed me was that in her acceptance speech, she humbly stated that she would speak in Hindi as her English was not so good. That statement won the audience's heart.

I believe she is someone who will not shy away from the truth, and go to considerable lengths to argue her version of it. I think, like many others, that intimate details about a relationship needn't be made public, as what happens between two people is for them to know and decide. But it's her choice to stand up and fight if she feels she has been wronged.

I applaud her for the stand that she has taken, when most in her place would succumb to the pressure and back off. This girl has taken the bull by its horns, and whatever the outcome it might just change the trend in Bollywood of taking people for a ride."