Last year we had announced that Madhuri Dixit will kick off her debut production. However, it won’t be in Hindi but her mother tongue Marathi. Besides debuting in acting in Marathi, the actress decided to venture into the regional industry in this different role. Now she is all set to take it a step forward with her Marathi production 15th August kicking off a couple of weeks ago. 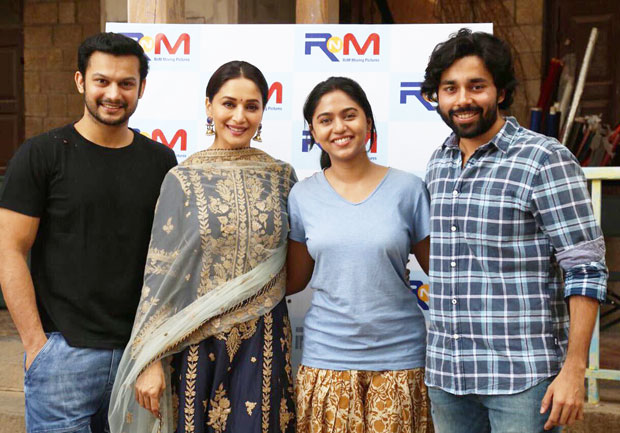 Yes, reportedly, Madhuri Dixit took her debut production on floor on February 24 in Mumbai. The film is being shot in a chawl in Malad located in the western suburbs. In fact, from what we hear, the 50-year-old actress’ mother Snehalata had given a clap for this production. The actress not only expressed her happiness of donning a producer’s hat after acting for three decades. She also asserted her belief in the director of the film Swapnaneel Jayakar.

On the other hand, we hear that considering that the film kicked off before Holi there was a small pre-holi bash too held to celebrate the occasion of starting the film. Speaking on the film, Madhuri revealed that it is a slice – of – life film which will make everyone realize that freedom is a gift that only you can give yourself.

Besides this, Madhuri Dixit will be reuniting with her Hum Aapke Hain Koun co-star Renuka Sahane in the film Bucket List. It will mark her acting debut in the Marathi industry.