The making of the much-anticipated film Shehzada is in its full gear. While the last update had that the team is in Delhi shooting major sequences in the city where the film is set, now we have learned that they have commenced the night schedule of the film. 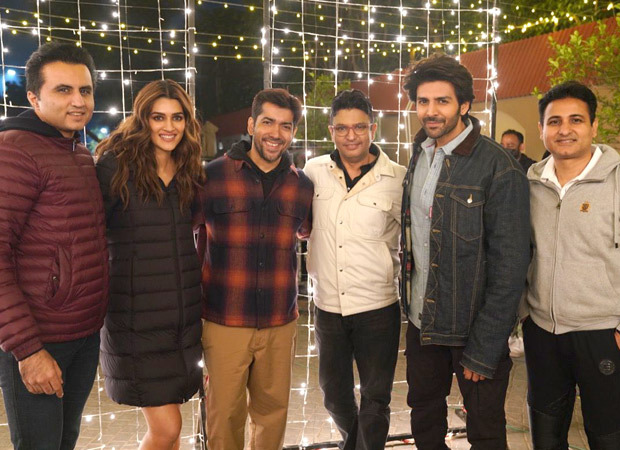 Kartik Aaryan and Kriti Sanon starrer Shehzada’s team huddles up to commence the night schedule of the film.

For the first time, the entire Shehzada team has been spotted together in Delhi for their night schedule. An exclusive picture from the sets features producers Bhushan Kumar and Aman Gill, filmmaker Rohit Dhawan, and star cast Kartik Aaryan and Kriti Sanon.

While speaking on the same, Bhushan Kumar said, "We have finally kickstarted the night schedule of Shehzada. We will be shooting for a song sequence that plays a pivotal role in the narrative. The entire team is really excited about the same."

In a similar vein, Aman Gill said, "We are excited to start shooting the first song of the film in Delhi after extensively shooting the talkie portions here. Our director Rohit Dhawan has planned to showcase the grandeur and character of the city in many visuals being picturized on the foot-tapping song composed by Pritam.”

From what we hear, the entire team has been shooting in extreme weather conditions owing to the severe cold in Delhi. For unversed, Aman Gill is making noise for his upcoming film Jersey, starring Shahid Kapoor and Mrunal Thakur, and will mark his second full-fledged production with Shehzada. Meanwhile, Bhushan Kumar is a leading name in the corridors of the Indian Film Industry, with many blockbusters to his credit, and is awaiting multiple releases this year.

Shehzada stars Kartik Aaryan, Kriti Sanon, Manisha Koirala, Paresh Rawal, Ronit Roy and Sachin Khedkar in the lead. The film is being directed by Rohit Dhawan and produced by Bhushan Kumar, Krishan Kumar, Allu Arvind, S.Radha Krishna, and Aman Gill. The film has been scheduled for a theatrical release on 4th November 2022. An action-packed family musical film has Pritam on board as Music Composer.