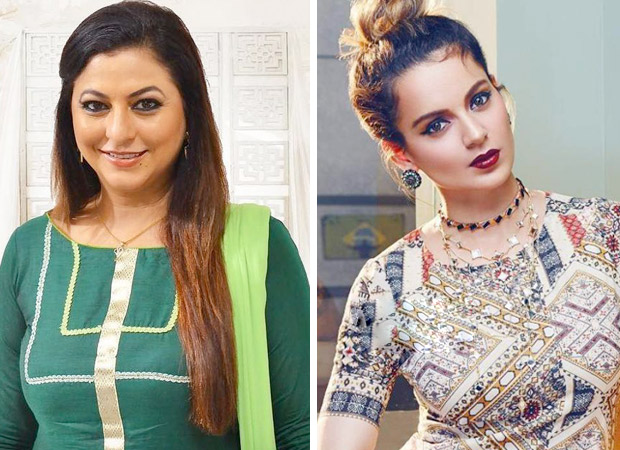 Earlier this year, Kangana Ranaut found herself in the midst of the controversy when she spoke about the ‘nepotistic’ Bollywood industry and now right before the release of her film Simran, the actress in between the promotions have been digging some closed doors of the past as she reignited the infamous Hrithik – Kangana controversy. Followed by her ‘bold’ uninhibited interviews where she has been accusing the Roshans, in one such interview, the actress has now dragged the Mumbai Regional Mahila Congress and Maharashtra State Commission for Women which have left the members of the organizations fuming.

Gurpreet Kaur Chadha who besides correcting her name that Kanagna used on the interview [she used the name Gurmeet on the show] presented her version of the entire story. Ranaut had blamed Gurpreet for being a ‘saleable hypocrite’ after the latter told her that she wouldn’t be able to pursue her case owing to her close relations with the Roshans as well as because they are powerful people in the industry. On the other hand, Gurpreet claims that Ranaut misinterpreted the term she referred to which was ‘bade log’ [big people] and that it wasn’t said with the aim of intimidating.

While agreeing to the fact that the Ranaut sisters indeed had approached her over the case because they could get in touch with the Roshans who were like family to Chadha, the latter asserted that she not only contacted the Roshans but Senior Rakesh Roshan also agreed to sort it out amicably if Kangana apologized. When she sent the message across to Rangoli, the Ranaut sister further maintained that they are pursuing it via the Cyber Crime cell.

In fact, Gurpreet had even requested the actress to send a written statement for her to pursue the matter officially but she neither received any such documents nor did the Ranaut sisters stay in touch with her post the matter. According to Chadha, they did not receive her calls or messages post the incident.

Responding to these allegations, Rangoli reportedly maintained that she did not really know Gurpreet but met her through a common friend who assured them that Chadha will be able to help them in the matter against the Roshans. However, according to Rangoli, the next day they received a call from her from the Roshan’s office where Chadha claimed that the organization would not be pursuing the matter since they are powerful people because of which Rangoli did not entertain any further contact from Chadha.

Kangana Ranaut, in her interview, also claimed that Gurpreet Chadha had been associated with the Maharashtra State Commission for Women [MSCW] but Chadha and the commission members have denied the latter’s association with the organization. While Chadha has already asked Kangana to apologize for using her name during the interview, the members of MSCW too are miffed for being dragged into the controversy without a reason. Chadha has also expressed that she could sue Kangana for defaming her but wouldn’t do so because she doesn’t want to take such a drastic step against a woman.

MSCW’s President, Vijaya Rahatkar has warned Kangana Ranaut of using her words correctly before making any such claims on a public platform and has denied of having any association with Gurpreet Chadha. On the other hand, President of Mumbai Regional Mahila Congress, Sheetal Mhatra expressed surprise over the same since she wasn’t reportedly informed about Kangana’s case. She stated that Gurpreet hasn’t been active on their circuit due to personal reasons and that she wasn’t aware about these. After the interview, she also claimed to have sent a text as she awaits her response to it.