Amitabh Bachchan has many projects lined up. The 75-year-old megastar is shooting one movie after another. Just recently, the actor wrapped up another schedule of Thugs Of Hindostan. On the other side, his Pink co-star Taapsee Pannu also has an array of films in the pipeline. As the duo was absolutely loved in Shoojit Sircar's Pink, filmmaker Sujoy Ghosh has plans to bring them together in his directorial. 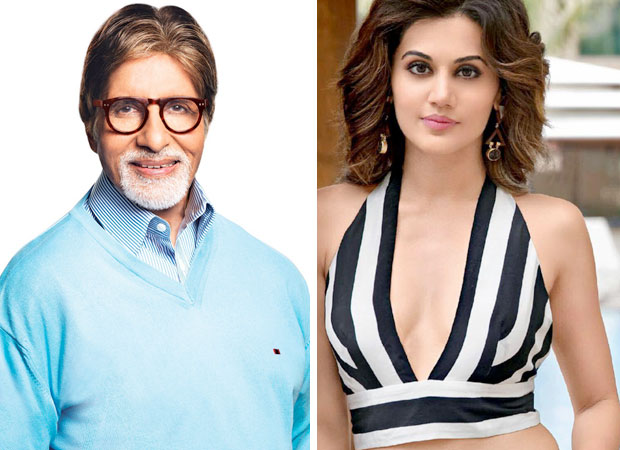 According to the insiders, filmmaker Sujoy Ghosh has signed Amitabh Bachchan for his next directorial venture. In addition to that, Taapsee Pannu has been reportedly roped in as the leading lady of the film. The film will be produced by Sunir Kheterpal under the banner Azure Entertainment. Not much has been revealed about the title and or story, but is very excited to see these two stars come together.

This ain’t the first time Sujoy Ghosh and Amitabh Bachchan will be working together.  The megastar was first seen in the filmmaker’s 2009 fantasy film Aladin. Then, he crooned for Vidya Balan’s thriller Kahaani which was helmed by Ghosh. Then, he starred in Ghosh's film Te3n. This would be the first collaboration between Sujoy Ghosh and Taapsee Pannu.

On the work front, Amitabh Bachchan has begun shooting for Chiranjeevi's magnum opus film, Sye Raa Narasimha Reddy. The film shooting commenced in Hyderabad. The megastar will shoot his part in Ayan Mukherji’s Brahmastra after his South film. The film stars Ranbir Kapoor and Alia Bhatt in the lead roles. It is scheduled for August 15, 2019, release.

Before Ranbir, the megastar will star in a movie with Rishi Kapoor in Umesh Shukla’s 102 Not Out. Billed as the most unusual father and son love story, 102 Not Out is based on playwright Saumya Joshi’s well known Gujarati play by the same name. The film is produced by SPE Films India, Treetop Entertainment and Umesh Shukla’s Benchmark Pictures. The film releases worldwide on 4th May 2018.

Meanwhile, Taapsee Pannu is busy shooting for Anurag Kashyap's film, Manmarziyaan. The film stars Vicky Kaushal and Abhishek Bachchan. Besides this film, she is starring in two films- Mulk and Soorma. All three of them will release later this year.

Also Read: Amitabh Bachchan’s Thugs of Hindostan leaked photo is FAKE; here’s the truth behind it