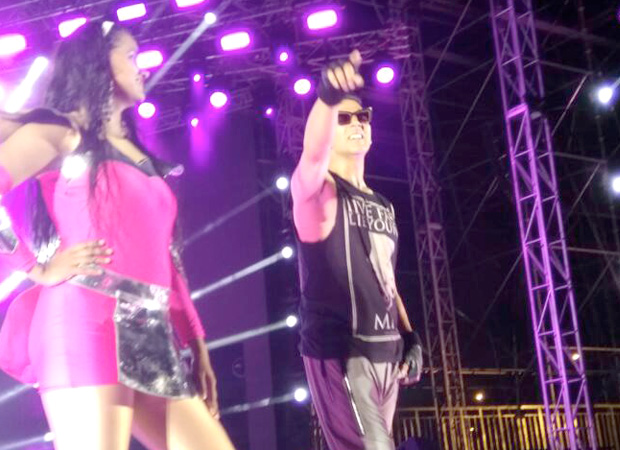 It's a NEWS BREAK and you read it first on Bollywood Hungama. Superstar Akshay Kumar is the surprise attraction at the first concert of ‘Dabangg – The Tour Concert’ in Hong Kong today (April 16). Akshay, fresh from the much deserved National Award victory, reached Hong Kong early in the morning and directly headed to the venue Central Front Event Space for the rehearsals. He rehearsed nonstop to a medley of super hit numbers. His entry on a bike is touted to be the big highlight of the evening. While Akshay will be part of Hong Kong concert of ‘Dabangg Tour’, he won't be a part of Auckland, Sydney and Melbourne.

Earlier in the day, Akshay Kumar expressed his happiness while talking to Faridoon Shahryar on winning the National Award. He was super excited about his forthcoming film Toilet Ek Prem Katha. "It is a very entertaining film, you'd love it. And it's not a documentary type film as some people are assuming," said the good natured Kumar.

The coverage of Bollywood Hungama for the ‘Dabangg – The Tour Concert’ has been getting a roaring response. The rehearsal coverage of Hong Kong concert on our hashtag #DabanggTourHungama has been trending on number one since the last 24 hours.