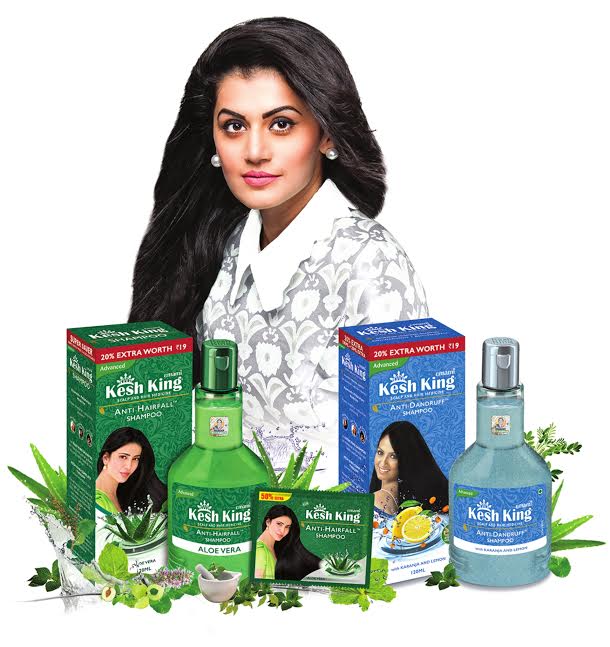 After the stupendous success and critical acclaim garnered by Pink, Taapsee Pannu is definitely one star who is riding sky high. Besides being the dream choice of almost every film maker, she is also being wooed by many FMCG brands to be their brand’s ambassador.

One such brand which has signed up the spunky Taapsee Pannu as their ambassador is ‘Kesh King’, the largest selling ayurvedic hair care solution range. Speaking about her association with the brand, Tapsee Pannu said, “We, as film actors, lead a very hectic lifestyle and often need to work under harsh conditions of strong studio lights, hair dryers, styling products and even polluted environs of outdoors. This takes a toll on our hair resulting in hair fall and other hair problems. This can be taken care of only through natural and ayurvedic products like Kesh King Shampoo. I am happy to be associated with Emami and its brand Kesh King which have a rich legacy of consumer trust”. Echoing her statement was Priti A. Sureka (Director- Emami Limited), said, “Kesh King has a rich legacy of ayurvedic heritage of a trusted natural haircare solution. Tapsee Pannu, one of the most promising fresh faces in Bollywood has the right fitment with the brand’s ethos of trusted naturalness, especially after the kind of character strength that she portrayed on- screen in her recent critically acclaimed film Pink. We are confident that our target consumers will endorse this association.”

On the films front, Taapsee Pannu will now be seen in Judwaa 2, which also stars Varun Dhawan (double role) and Jacqueline Fernandez. Directed by David Dhawan and produced by Sajid Nadiadwala, the film is slated to release on September 29 this year.