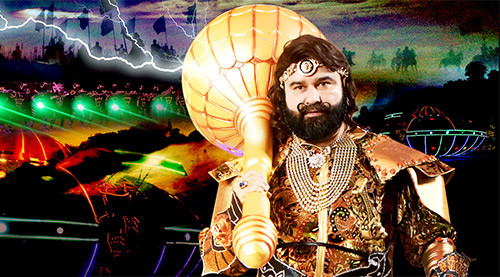 Ever since the time the trailer of MSG The Warrior: Lion Heart has been released, it has definitely increased everyone's curiosity and excitement about the film and its release. After having won hearts with the film's promos and the grand music launch, Saint Dr. MSG was being persistently asked on Twitter about the release date of the film. In a live webcast on YouTube, Saint Dr.MSG put everyone's excitement to rest by declaring that MSG The Warrior: Lion Heart will be releasing on October 7 this year.

Speaking about MSG The Warrior: Lion Heart, Saint Dr.MSG said, "MSG The Warrior Lion Heart chronicles the past life of 'Lion Heart', the high-tech secret agent. As he faces the aliens and their high tech weapons a few hundred years ago, he has to unlock the age old secrets of the ancient India in order to get technologies to face the seeming insurmountable enemy. MSG The Warrior: Lion Heart, which was shot in merely 25 days flat, revolves around a medieval warrior who fights alien invaders from outer space for the honor of his land and the dignity of the womenfolk."

During the event, Saint Dr.MSG was asked if he would be going to TV shows to promote his film MSG The Warrior: Lion Heart. To which, Saint Dr.MSG, in his ever-so-impressive trademark style, said, "The fourth estate is a pillar of society. Why certain TV shows? It is you, the media, which is the most powerful means of promotion. The media, the fourth estate is the most powerful tool to promote our film.

Amidst the event, when Saint Dr.MSG was asked about the recent terror strike in Uri, Saint Dr.MSG spoke candidly against the dastardly act. He said, "It is an act of extreme cowardice, killing soldiers in sleep. But India should seal its borders absolutely tightly. Statements are not enough, it is time that India moved the international fora to declare Pakistan a terrorist state. Only when their foreign funding stops, they might move to mend their ways. India should work with the international community to declare Pakistan as a terrorist state.

And for all those who swear by Saint Dr.MSG's multi-talents (readers may note that MSG The Warrior: Lion Heart will see him handling as many as 30 departments!), Saint Dr.MSG gave the good news that upped everyone's enthusiasm superlatively. Saint Dr.MSG said that, while MSG The Warrior: Lion Heart will be releasing on October 7 this year, the sets for the next film (the fifth in the series) were almost ready. Saint Dr.MSG also 'revealed' that the next film will be a comedy, wherein, he would showcase the fact it was very much possible to create healthy humor without resorting to any double meaning dialogues.

Akshay Kumar REACTS on being summoned in…

Rakhi Sawant gets defamation notice from…

“I am best qualified to expose Honeypreet &…