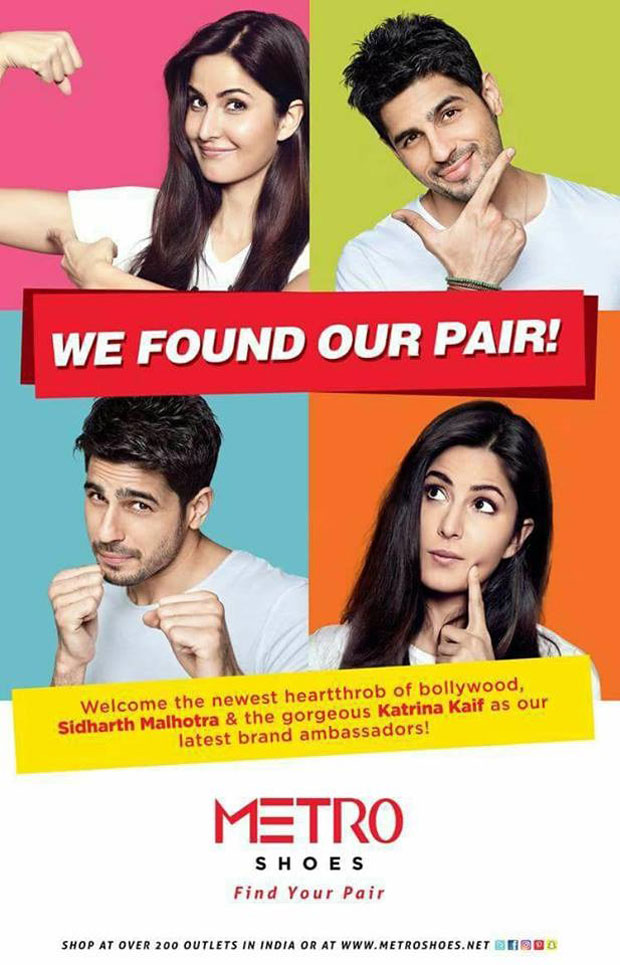 Katrina Kaif and Sidharth Malhotra, who starred in Baar Baar Dekho, are coming together for a brand. The actors have been roped in as the new brand ambassadors for Metro Shoes, the Indian fashion footwear retailer.

According to the reports, Sidharth Malhotra and Katrina Kaif will now be endorsing the new range of Metro Shoes’ stylish footwear range. It has been learned that the Metro Shoes will be running print, digital and outdoor campaigns featuring the actors. Their new campaign aims to be put a strong fashion forward statement as represented by the trendsetters Katrina Kaif and Sidharth Malhotra.

As part of the brand association, Katrina Kaif and Sidharth Malhotra’s first brand campaign for Metro Shoes was released on September 28, ahead of the festive season.

On the work front, Katrina Kaif will be next seen in Ali Abbas Zafar’s Tiger Zinda Hai with Salman Khan. The film is scheduled to release on December 22, 2017. Besides this, the actress is starring in Aanand L Rai’s untitled film and YRF’s Thugs of Hindostan which is scheduled for November 2018 release. Sidharth Malhotra, on the other hand, has wrapped up Neeraj Pandey’s next Aiyaary which is slated to release on January 26, 2018.