The hugely successful Hindi Mediu, which released by T-Series and Maddock Films last year, has been given the distinction of a China release on 4th April, 2018. In the past, selective films have enjoyed a successful entry into the Chinese market. Produced by Dinesh Vijan and Bhushan Kumar, directed by Saket Chaudhary, the Irrfan Khan & Sabah Qamar starrer received immense appreciation from audiences and critics, followed by a several awards, allowing Hindi Medium to organically make its way to be exhibited in China. 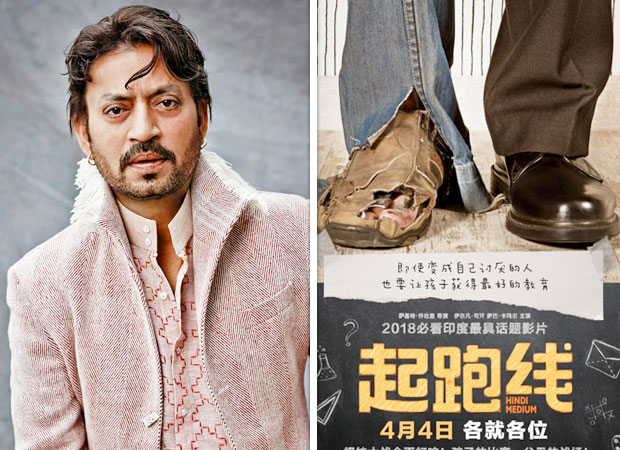 The Chinese authorities who choose their bouquet of films every year, have been so impressed with the content of Hindi Medium that rather than the main poster, they opted for the teaser poster that had been designed by celebrated publicity designer, Rahul Nanda.

Producer Bhushan Kumar says, “There’s a unique twist in this tale. Hindi Medium is content driven and even though Irrfan is an internationally recognised talent, the Chinese distribution body opted for our teaser concept which shows the feet of a man, one representing poverty and the other representing material wealth.”

The poster clearly reflects the disparities in society and as the film Hindi Medium does, the image holds a mirror to our society where the ability to speak fluent English is ignorantly considered a yardstick to measure sophistication and elitism.

Producer Dinesh Vijan signs off, “This is exactly what made Hindi Medium so significant. The idea that we give importance to material wealth and our social image over the value of humanness and love baffles me, but sadly it’s what drives most of the society and portraying this in a light yet meaningful form is what resonates with audiences universally.”

Here’s hoping Hindi Medium enjoys the same love and adulation across our border.