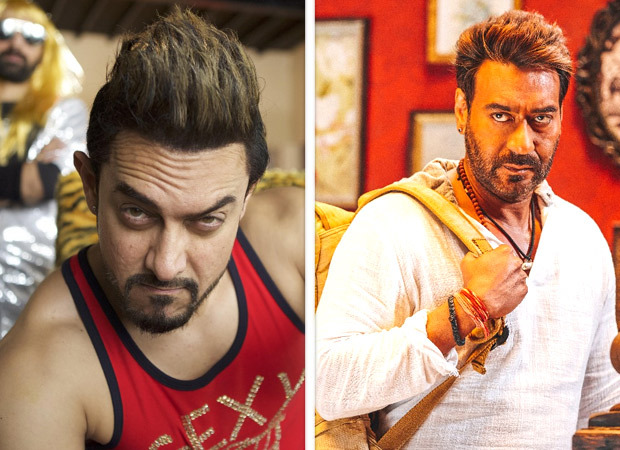 This festive season of Diwali much like the previous ones we see Ajay Devgn go head to head with another celebrity at the box office. With GOLMAAL AGAIN and SECRET SUPERSTAR hitting screens together the audience are certainly spoilt for choice. But which of the two releases will take the lead at the box office is the question of the hour.

Reports suggest that the Aamir Khan starrer SECRET SUPERSTAR has opened on a slow note, with occupancy rate during morning shows being pegged at just 35-40%. On the other hand the Rohit Shetty directorial GOLMAAL AGAIN has taken off on a better note, with an occupancy rate of 70%. With this the Ajay Devgn starrer GOLMAAL AGAIN which is the fourth film in the Golmaal franchise has taken the lead over SECRET SUPERSTAR at the box office. With serpentine queues and packed morning shows, House Full boards are back in cinemas once again after BAHUBALI – THE CONCLUSION. At certain places, the opening for GOLMAAL AGAIN has been the best of the year so far.

However, while both films enjoy the advantage of a festive weekend both GOLMAAL AGAIN and SECRET SUPERSTAR will face competition coming from South films viz. MERSAL (Tamil) and RAJA THE GREAT (Telugu) that are releasing today. In fact, in the Southern belt these releases are expected to impact the overall collections of SECRET SUPERSTAR and GOLMAAL AGAIN.

On the other hand, though GOLMAAL AGAIN has taken the lead initially, SECRET SUPERSTAR that has received positive reviews from critics and the good word of mouth among the audience is expected to aid the film greatly. Besides this another factor that has greatly assisted the overall box office prospects is the fact that the film has managed to garner impressive shows [in some cases on par with GOLMAAL AGAIN] across the urban multiplexes.

On the whole, SECRET SUPERSTAR is all set to have a long run at the box office with Muslim populated sectors stimulating the overall collections further. Apart from this since the film features a story about a mother and child relationship, women across the spectrum are expected to patronize the film in large numbers. The movie is expected to collect Rs. 8-10 cr. on Day 1 today.

As for GOLMAAL AGAIN, the biggest disadvantage is that the movie had a very low advance across key multiplex chains of the country due to the last moment distribution negotiations. This is expected to hurt the movie on Day 1 but a strong brand recall value will ensure the movie garners enough footfalls over the weekend. GOLMAAL AGAIN is expected to open with Rs. 20 cr. today.

Overall, while SECRET SUPERSTAR has released across 1192 theatres [1750 screens], GOLMAAL AGAIN sees a release across approx. 3500 screens, but both the movies come across as a huge relief to the industry which was reeling under spate of flops.