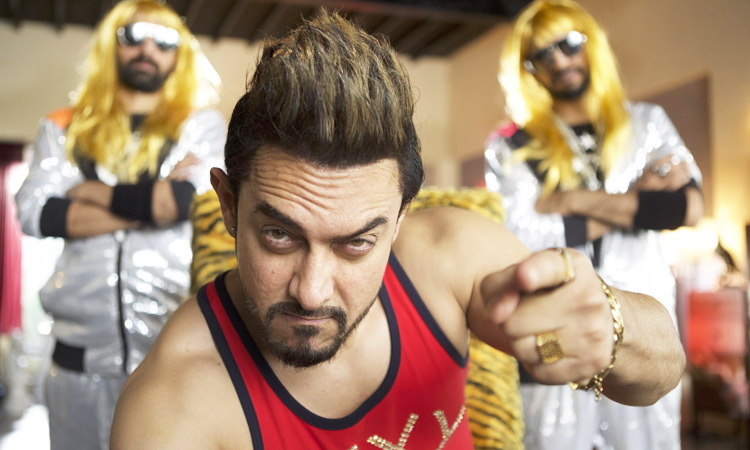 It's 2017, yet it's not uncommon to see that many don't have the liberty to pursue the dream of their choice. SECRET SUPERSTAR, helmed by first-time director Advait Chandan, tells one such extra-ordinary story and emphasizes that exceptional talent can't be hidden or suppressed - it's bound to come to the fore some day.

An Aamir Khan production is special. Recall the films the reputed production house has produced over the years. The expectations from SECRET SUPERSTAR are obviously sky-high. Does it live up to those expectations? Does Advait deliver as a storyteller? Let's get to the point right away: SECRET SUPERSTAR is one of the finest films of the year, no two opinions about it.

SECRET SUPERSTAR narrates the story of an aspiring singer who faces roadblocks in fulfilling her dream. Insia [Zaira Wasim] is a school-going girl based in Vadodara. She has a lovely voice and dreams of being a top singer. Her mother Najma [Meher Vij] supports Insia's dream, but her father Farookh [Raj Arjun] is thoroughly against the idea due to his conservative mindset. He tries everything - from force to destroying Insia's guitar - to stop her from fulfilling her dreams. She, however, remains adamant.

Insia takes to the internet and posts videos of her singing. Wearing a burkha, she makes sure only her eyes are visible in order to keep her identity concealed. She's taken by surprise when her videos go viral. Enter Shakti Kumar [Aamir Khan], a brash, lecherous but successful music composer. Insia gets a chance to meet Shakti. What happens next forms the rest of the story.

To start with, SECRET SUPERSTAR hits the right notes. The goings-on make you laugh and also leave you moist-eyed in certain scenes. In fact, you go through varied emotions in those 2.30 hours. In today's times, when there's a demand from certain sections of audiences to have fast-paced films with a runtime of less than 2 hours or 2 hours, SECRET SUPERSTAR neither moves too swiftly nor drags - the pace is just perfect.

The characters are neatly introduced and the storyteller remains faithful to the material. Certain moments stay with you even after the culmination of the movie: The presence of the father shakes you up and one can feel the tension... The penultimate 20-25 minutes are outstanding and give you goosebumps... Also, one of the high-points of the movie is the focus on the mother-daughter relationship... The friendship bond between Zaira and Tirth, her school friend, is very cute.

Advait handles the subject with utmost sensitivity. Not only does the film mirror the conservative attitude that exists in our society, but also makes a comment on women empowerment. The screenplay is uncomplicated, while the dialogue are simple and conversational.

Any glitches? Not really, except that the middle of the second hour could've been tighter. That's it!

Zaira wins you over with a heartfelt act. She's in splendid form in SECRET SUPERSTAR. It is surely a worthy follow up to her sparkling act in DANGAL. Her emotional outburst before the climax of the movie or the speech towards the final moments prove that she's a powerhouse of talent. Aamir is the catalyst in Zaira's journey and he enacts the of over the top, loud and brash character flawlessly. He lets Zaira shine as he relegates himself to the background. Yet, it must be mentioned, only he could've essayed the character with such aplomb.

Meher is terrific and her performance is one of the key reasons why the character stands out. Raj Arjun is tremendous. Tirth has an important character and he is utmost natural. Farrukh Jaffer [Badi Appa] is superb in a significant role. Kabir Sajid [as Insia's brother Guddu] is adorable.

The soundtrack [Amit Trivedi] is soothing and gels wonderfully with the genre of the film. 'Main Kaun Hoon' is the best of the lot, while 'Meri Pyaari Ammi' is lovely. Cinematography [Anil Mehta] is first-rate.