India’s first deadly  yet enthusiast sport is coming your way. Mud skull off-roading is making its audience’s way soon. The fitness icon, and a sportsperson at heart, Suniel Shetty is the brand ambassador of the Mud skull off-roading racing, season 3 in collaboration with Sam Khan, an entrepreneur, Subodh Singh and Ashish Singh, an off-road enthusiast. These 3 pillars of off-roading have come up with such an adventurous sport in India. 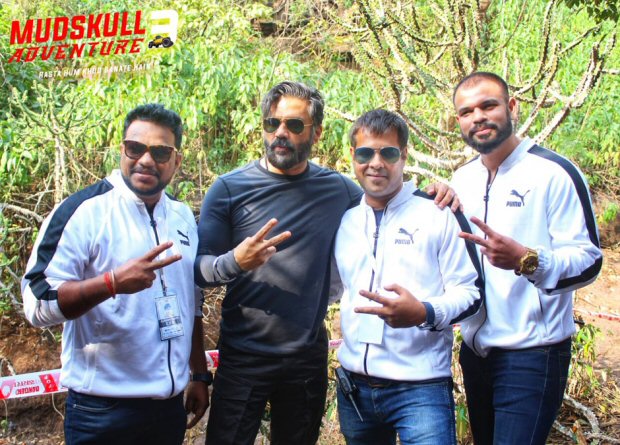 In a quick interaction with Suniel Shetty, he said, “Mud skull off-roading is now a big event and sport of the emerging new India. Like any other sport, people are off-roading with zeal and passion. The USP of this event is its most challenging tracks and location.” The off-roading will be organized at Pali which is yet another beautiful destination for such a tough sport. Though it is a deadly sport, but the enthusiasm for this sport is beyond the limit as it is happening after a gap of three years. There will be more than 200 professional riders. As a safety concern, the tracks and terrain are made under great supervision. The great machine and cars are equipped with safety gear and harnesses. India is such a country that never lacks in terms of infrastructure and safety. On being asked about the skills and training required for such sport, he said that good passionate drivers who can handle the heavy machine and tough terrain, good knowledge of safety, navigation and how they can manipulate the tracks.

He further said that in this season 3, even the families are also involved along with their kids where they can drive on the non-professional tracks and enjoy the fanfare, music, and entertainment. This season is special as it is bringing the families together for such an outdoor sport. In this season, many couples as well as women riders have also enrolled. It makes us proud to see many more women riders in such tough terrain. This sport will give you an adrenaline rush for sure.

It will also connect the audience with their love for a great, beautiful machine. With the changing India, it's high time that we include such a beautiful sport. Mud skull off-roading is a new sport emerging in India.

In collaboration with Sam, Subodh, and Ashish he said, “they are the pillars of the mud-skull off-roading. Mud-skull off-roading is the brainchild of these men. They are passionate about what they do. They have great knowledge, safety concerns and great ideas to make such a sport entertaining.” The off-roading event is being organized by Mud skull adventure Pvt. Ltd., Mumbai.