Kangana Ranaut is controversy’s favourite child and when she is not making explosive statements herself, her movies get mired in some or the other issue. Recently, a poster of her upcoming movie Mental Hai Kya came out and it disturbed a few sections of society. Organizations safeguarding the interests of mental health patients wrote to CBFC to urge makers to change the title of the movie as it reaffirmed the stereotypes associated with mental illnesses. These organizations included Indian Psychiatric Society and the Indian Medical Association, along with Deepika Padukone’s The Live Love Laugh Foundation (TLLL Foundation). 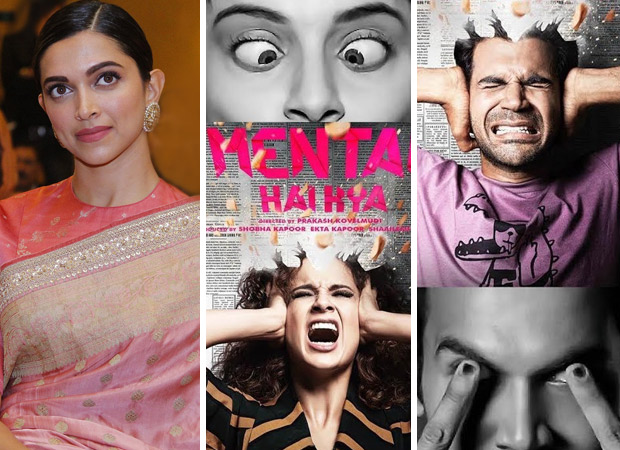 In series of tweets, the foundation condemned the choice of title along with the depiction of the leads on the poster. In a formal statement, the organization tweeted, “It is time we put an end to the use of words, imagery and/or the portrayal of persons with mental illness in a way that reinforces stereotypes. Many millions who suffer with mental illness in India already face tremendous stigma. Therefore, it is extremely important to be responsible and sensitive towards the needs of those suffering.”

Rangoli Chandel who is Kangana’s sister and also her manager tweeted this in response, “Dear @TLLLFoundation Ms Ranaut who is recipient of three national awards and one of the driving forces of feminism movement in India through her films like Queen & Manikarnika is one of the most responsible artists, to jump the gun & assume the worse is nothing bt immature. All I can say is that for Manikarnika we held screenings for school children in many states of India after MHK we would like to do the same with you .”

She further said, ”Genre of the film is such ( thriller ) that we cant reveal the exact plot or the parts that the characters are playing but of course we will acquire all the certificates we need in order to show case the film to public.... I have a feeling after MHK you will remove @deepikapadukone & get Kangana on board as your brand ambassador, her sincere effort to bring awareness to the cause and sensitive portrayal of the condition will leave such an impact on you.”

She did not stop at this as she went on to say, “Anyway @deepikapadukone  was despressed many years ago when her break up happened, now she is a happily married woman who is enjoying marital bliss. whereas Kangana after Jhansi ki Rani proudly wearing the title of Mental, being a young woman its not easy, think about it please, we would like you all to join hands with u, spread awareness and help remove embarrassment and shame attached to this word.

Rangoli then dragged Hrithik Roshan and Karan Johar into the controversy and claimed that stress caused by them to Kangana disturbed her mental health and she therefore is sensitive to everyone suffering from illness of this kind.

She tweeted, “With Kangana’s permission I am sharing her story, two years ago, her silly ex along with nepotism gang attacked her just to publicly embarrass and discredit her, they called her Mental and bipolar.” She added, “Endless jokes and memes were made with the intention of insulting and harassing her, rather than feeling humiliated or defensive Kangana pledged to fight the stigma attached to the illness, MHK is a story f fight against this very prejudice Kangana faced 2 years ago.”