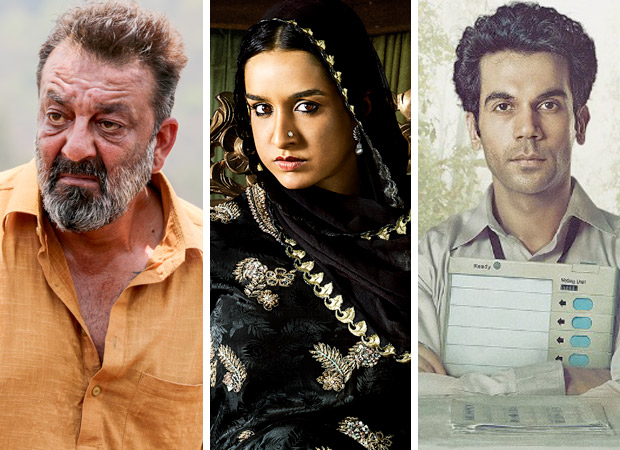 This week we see a rather full release pattern with three varied films viz. BHOOMI, HASEEN PARKAR and NEWTON hitting screens. While the first BHOOMI which marks the return of Sanjay Dutt to films post his release is expected to fare better than the rest, HASEENA PARKAR follows the story of dreaded underworld don Dawood Ibrahim’s sister Haseena Parkar with Shraddha Kapoor in the lead, and the third NEWTON that features Rajkummar Rao is about an honest rookie government official. But which one of the three will strike a chord with the audience and eventually emerge as the leader is the question of the hour.

Current reports state that all three Bollywood films have opened within the range of 5-15%. With BHOOMI starring Sanjay Dutt and Aditi Rao Hydari that has released across 1894 screens with 5627 shows, leading the pack at a steady 15%, HASEEN PARKAR has managed an occupancy rate of 10% while NEWTON brings up the rear with a 5% occupancy rate. However, in certain parts of Mumbai the Shraddha Kapoor starrer HASEENA PARKAR has managed to feature a better opening owing to the territorial based subject of the film which resonates more with the populace. Similarly, within the Northern belt, certain multiplexes have registered a better opening for NEWTON as compared to the other Bollywood ventures, however, the new Punjabi release NIKKA ZAILDAR 2 that hit screens today has opened on a much higher note in this territory. While the Telugu film JAI LAVA KUSA featuring Jr. NTR, Raashi Khanna and Nivetha Thomas which is said to be an action-drama film written and directed by K. S. Ravindra is doing well in the South.

On the whole, though BHOOMI which has opened on a much better note overall is expected to lead the weekend race, with HASEENA PARKAR and NEWTON taking the second and third spot respectively, all three films will face immense competition not just from each other but also from the regional releases viz. NIKKA ZAILDAR 2 and JAI LAVA KUSA.