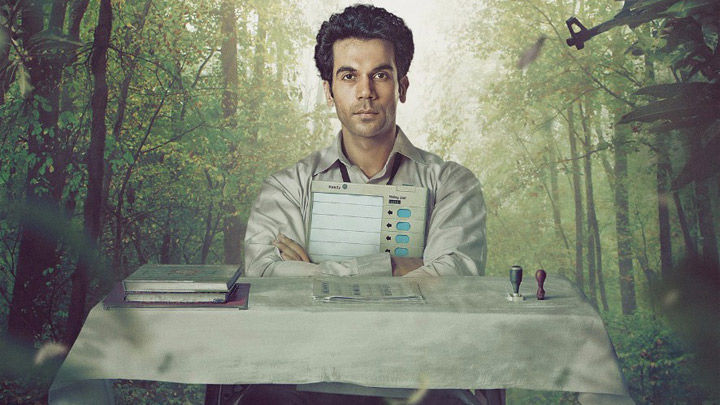 The former Prime Minister of India had once declared that Naxalism is the biggest threat to India’s security. Keeping the seriousness of the growing menace of Naxalism in mind, it is highly shocking that in the last ten years, there have been only a handful of films made on this topic like CHAKRAVYUH, RED ALERT: THE WAR WITHIN, CHAMKU etc. Amit Masurkar, who rose to prominence with the small-budget indie film SULEMANI KEEDA, makes good use of the vacuum of Naxal-related flicks and presents NEWTON, a film that has made waves at the film festivals overseas. So is the hype worth it or it’s a forgettable flick, let’s analyse.

NEWTON is the story of a government officer trying to conduct a free and fair election against all odds. Newton Kumar (Rajkummar Rao) is a righteous government officer living in a small town in Chhattisgarh. He is entrusted with the task of going to a Maoist-infected town and ensure that the residents there are able to vote despite the odds stacked against them. The officer entrusted with the security of Newton and his team is Aatma Singh (Pankaj Tripathi) who understands the difficulties of the region and has his own way of dealing with things. Newton doesn’t agree with him and this creates a friction between them. What happens on D-Day and whether Newton succeeds in his endeavour forms the rest of the film.

The story penned by Amit Masurkar’s rests on a weak pivot. It is based on an interesting idea but overall, there’s nothing exciting in the plot. Mayank Tewari and Amit Masurkar's screenplay is quite lacklustre, especially in the second half. Few sequences are well written but the film drags needlessly at places diluting the impact of the good sequences. Mayank Tewari and Amit Masurkar's dialogues however are funny and witty. Amit Masurkar’s direction is simple. But thanks to the weak script, it fails to be impressive.
NEWTON begins very well and sets the mood with the first scene itself – the brutal killing of an election candidate. It establishes the danger associated with anything democratic in that particular region. The character of Newton and his honesty is also depicted nicely. Of course the fun begins when Newton reaches the conflict affected region. The sequence where he meets Aatma Singh for the first time adds to the entertainment and one expects fireworks once Team Newton reach the polling booth. Sadly for the next fifteen minutes, nothing happens in the film at all! Even post intermission, the film doesn’t really go anywhere. One does hope that something radical or exciting will happen in the finale but the hope gets crushed. Moreover, NEWTON is a very niche film and there’s absolutely no commercial value for a majority of the moviegoers.

Rajkummar Rao as always delivers a terrific performance. The manner in which he gets into the skin of his character is seen to be believed. He looks every inch a rookie government officer with morals. This is his biggest victory – he makes his characters believable. Pankaj Tripathi is like the second leading actor of this film and takes the film to a high, especially in the beginning. There is a sense of ease and laidback-ness in his acting that works very well here. Anjali Patil (Malko), who coincidentally also worked in another Naxal film CHAKRAVYUH, performs with panache. She also speaks in Gondi language and seems convincing. Raghubir Yadav (Loknath) gets a bit overpowered in the towering presence of Rajkummar Rao and Pankaj Tripathi. But he does get to shine in few scenes. Watch out for him when he narrates about his novel and when he claims that Ravana was India's first pilot. Mukesh Prajapati (Shambhu) is decent and leaves a mark in the scene where he asks for the land price. Omkar Das Manikpuri (local police officer), who was the leading actor in PEEPLI [LIVE], has a very small and insignificant role and is just okay. Sanjay Mishra (Election officer) is first rate as expected.

Rachita Arora's music has no scope. ‘Panchi Ud Gaya' is the only song and it is relegated to background. Naren Chandavarkar and Benedict Taylor's background score is very impressive and gives a unique touch to the film.

Swapnil S Sonawane's cinematography is satisfactory. Shweta Venkat Mathew's editing is crisp although some sequences drag. But that’s the fault of the writer more than the editor. Angelica Monica Bhowmik's production design is straight out of life

On the whole, NEWTON is embellished with powerful performances. But it’s a niche film and hence holds very limited entertainment value for the traditional cinema going audience. Also, the lack of buzz and multiple releases this week will make it tough for it to register impressive numbers.

It's a superb movie! Rajkumar Rao and Pankaj Tripathi are as usual excellent! Film shows…

Great movie by Rajakumar Rao. Wonderful work by whole cast. Definitely to watch in theatres. You…

Just in review video, I can give 5 star. The movie will be beyond star rating. Classic social…