The animated film Nimona, scrapped following the shutdown of Blue Sky Studios amid Disney’s acquisition of Fox, has now landed at Netflix. The adaptation of ND Stevenson’s best-selling graphic novel was previously set up at the Fox-owned Blue Sky Studios, which was later shuttered by Disney. 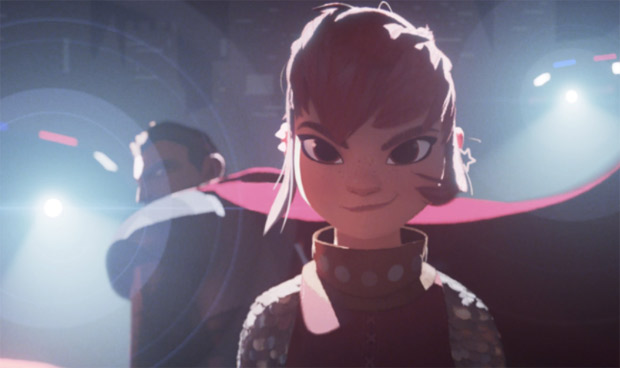 According to The Hollywood Reporter, after years of development and production stop-and-starts, Nimona is finally heading to Netflix. The feature animated adaptation will hit the streaming service in 2023, with production having begun earlier this year. Netflix is partnering with Annapurna on the movie from directors Nick Bruno and Troy Quane (Spies in Disguise), which stars Chloe Grace Moretz and Riz Ahmed.

Stevenson excitingly announced the news by tweeting, "Nimona's always been a spunky little story that just wouldn't stop. She's a fighter…but she's also got some really awesome people fighting for her. I am excited out of my mind to announce that THE NIMONA MOVIE IS ALIVE…coming at you in 2023 from Annapurna and Netflix"

Nimona’s always been a spunky little story that just wouldn’t stop. She’s a fighter…but she’s also got some really awesome people fighting for her. I am excited out of my mind to announce that THE NIMONA MOVIE IS ALIVE…coming at you in 2023 from Annapurna and Netflix ???? pic.twitter.com/wEZuM2sXTt

Netflix’s official synopsis for the animation feature reads: “A Knight is framed for a crime he didn’t commit and the only person who can help him prove his innocence is Nimona, a shape-shifting teen who might also be a monster he’s sworn to kill. Set in a techno-medieval world unlike anything animation has tackled before, this is a story about the labels we assign to people and the shapeshifter who refuses to be defined by anyone.”

Fox-owned Blue Sky Studio originally produced the Nimona movie. Following Disney's purchase of 20th Century Fox, the film faced multiple delays and eventually it was announced that production on Nimona had been halted. Anonymous staff working on the project claimed that Disney executives pushed back against the inclusion of explicit LGBTQ relationships and romantic themes. In the midst of a controversy surrounding Disney and Florida's "Don't Say Gay" bill, many in animation came forward about how the company has been censoring LGBTQ representation in their work. A March 2022 Business Insider story quoted former Blue Sky staffers that Disney leadership took issue with a same-gender kiss that was set for Nimona.