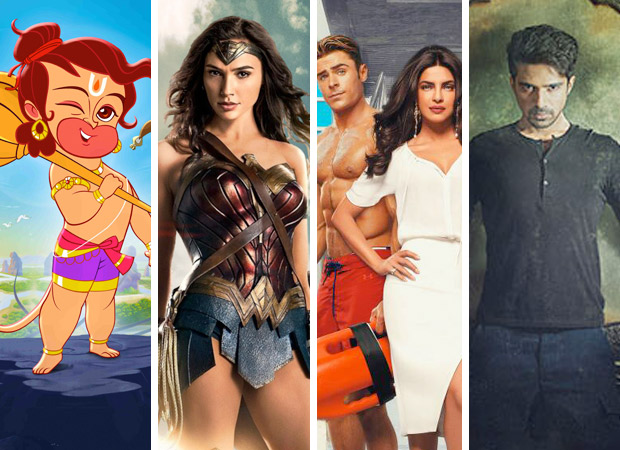 This week we see a cluttered box office with multiple films hitting screens. However, the audience enjoys a wide variety to choose, from animation, to action, to popcorn entertainment to horror. But will either of the prominent releases viz. HANUMAN DA DAMDAAR, WONDER WOMAN, BAYWATCH and DOBAARA: SEE YOUR EVIL; manage to hold the audiences’ interest is the question of the hour.

Reports suggest that the animation flick HANUMAN DA DAMDAAR that has received a UA rating from the CBFC has opened on a better note as compared to the other Bollywood release DOBAARA: SEE YOUR EVIL. In fact the latter has opened on a sluggish note, and since it caters to the rather niche genre of horror aficionados, the film is expected to see a low key response. On the other hand, the Hollywood release WONDER WOMAN that has received highly positive reviews in the west has opened on a higher note as compared to all the other newer releases. However, the film will face a tough time at the domestic box office owing to a rather limited release. The Priyanka Chopra’s debut Hollywood vehicle BAYWATCH that was panned in the west seems to be suffering at the domestic box office as well.

On the whole, while all the new releases will have to compete with each other for a share of the audiences’ wallet, they will also face competition from the previous releases HINDI MEDIUM, BAHUBALI 2, and to a certain extent even HALF GIRLFRIEND. In fact, each of the new releases will have to rely very heavily on positive audience feedback to post decent weekend collection figures.