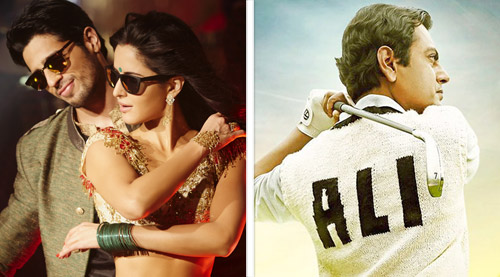 Baar Baar Dekho should take a good start at the box office. The strategy put together by Eros, Dharma and Excel to release their chartbuster song 'Kaala Chashma' before the theatrical promo paid off in a big way. While the promo got good reactions as well, the recollection factor was enhanced due to the super hit song picturised on Sidharth Malhotra and Katrina Kaif that did the trick. Rest was taken care of by very good promotional plan in the weeks that followed and the hype has reached its peak as well.

The film is set for a good start and all eyes are on whether a double digit opening is on the cards. This is possible, considering the fact that audiences have been waiting for a big budget feel good entertainer for a while now. Last big success was Rustom and that was a dramatic thriller. For family audiences, teenagers and youth, this Nitya Mehra directed film is just the kind that promises good entertainment for the big screen. Baar Baar Dekho should see an opening in the 50% range and if the final product turns out to be good as well, there are jumps on the card for rest of the weekend.

Freaky Ali also boasts of a good promo and in fact it did manage to create a fine impression when it arrived. Director Sohail Khan indeed has a different story to offer which promises good fun too. Nawazuddin Siddiqui is looking in his elements and Arbaaz Khan, after providing comic support in Kis Kisko Pyaar Karoon, is an able support as well. The songs of the film though are minimal in number and haven't turned out to be hugely popular. Somehow one feels that the follow through promotion could have been even stronger to make the film a must watch affair this Friday.

Nonetheless, it is also understandable that Freaky Ali is the kind of film that works more on the basis of word of mouth than an initial. All of this means that even if it is takes a 25%-30% opening and then picks up through audience response, the controlled budget would allow it to stay on contention post the weekend. For that it is quite rudimentary though that the film turns out to be as much as the (well made) promo has to offer.

All in all, a promising weekend is on the cards and Bollywood continues to live with the hope that there would be turnaround indeed with more films turning out to be truly entertaining, and hence being successful commercially.