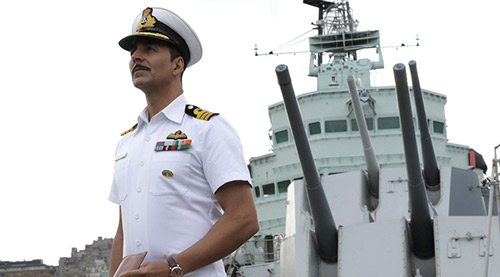 It is going down to the wire for the chase of Rustom in quest of going past the lifetime of Airlift. The Akshay Kumar starrer patriotic thriller had collected Rs. 129 crore at the Box Office earlier this year. NowRustom, which again is a patriotic thriller, with a strong romantic drama element to it, has collected Rs. 126.38 crore already. After its three week run of Rs. 124.72 crore, the film has added Rs. 1.66 crore more. Looking at the trending so far, the Tinu Suresh Desai directed film will certainly cross Rs. 127 crore before close of week four.

This would mean that Rs. 2 crore more would have to be added to the film's lifetime so that Airlift can be crossed. It would pretty much go down to a matter of a Rs. 25-30 lakhs on either sides since the film won't be devoid of competition in weeks to come. There is Baar Baar Dekho this Friday and then there is a big film every week after that. This is indeed going to be an exciting ride ahead.

Diana Penty's Happy Bhag Jayegi is holding on well for that segment of audience which is looking for light hearted entertainment. The film has collected around Rs. 2.75 crore already in its third weekend and then Monday. As a result, the collections have gone past the Rs. 27 crore mark. The film will now most definitely cross Rs. 30 crore mark and that would take it past the lifetime of Sonam Kapoor's Khoobsurat[Rs. 30 crore].

This is indeed a good fate for the Eros and Aanand L. Rai film as an opening day of Rs. 2.32 crore didn't quite promise this sort of run for director Mudassar Aziz. However, the power of word of mouth has ensured that the film continues to finds acceptance amongst the audience, which has given a go ahead to its good run.

The film is a success and now it has to be seen that how much further it goes from this point on.