Sonam Kapoor's wedding has been a talking point in the industry for over a few weeks now and why not? She is Bollywood's fashionista who has her own clout and fan following thanks to the fact that she is known for the flawless sartorial sense on Indian and international soil for over a decade now. Finally, the talented actress got her fairy tale ending to the endearing love story she had with Anand Ahuja for over four years. She got married to him in a traditional Sikh ceremony earlier today at the iconic Rockdale bungalow in Bandra. She chose an Anuradha Vakil gold and red lehenga and looked splendid as a typical Punjabi bride. Anand, on the other hand, wore a gold sherwani by Raghavendra Rathore. 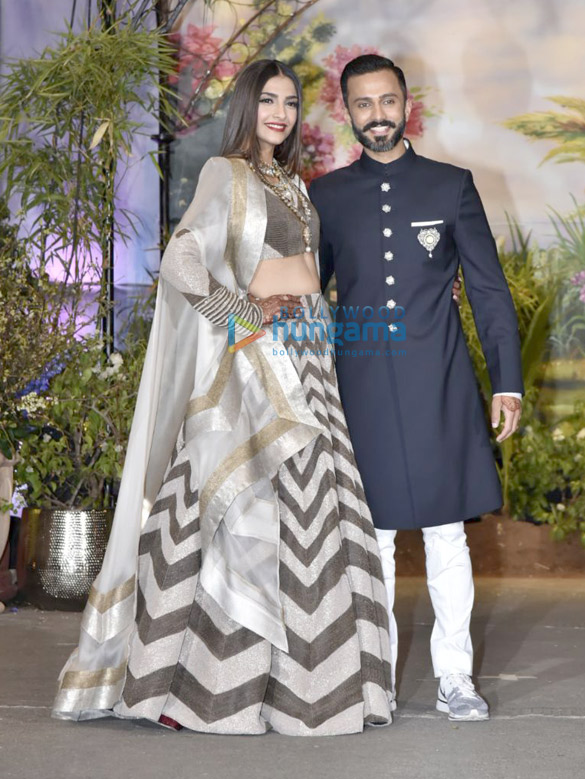 All of Sonam's looks so far were spectacular beyond a doubt and she exuded the same charm this time around! Well, the bride’s first pics are out and she looks resplendent Anamika Khanna creation! It looks like she was saving her best look for the last day. Beyond a doubt, Anamika brings out the best in Sonam and we are in awe! Sonam truly is a typical contemporary modern bride in this creation. Sonam Kapoor rocked a grey, gold and ivory Anamika Khanna ensemble featuring a chevron printed lehenga and full sleeved choli. Bright lips, sleek hair and layered necklaces rounded out her minimalist look! Anand Ahuja teamed his monochrome sherwani with sneakers as he gazed at his resplendent wife!

Also, do not forget the bride's inner glow which makes her look so ethereal. Anand Ahuja too flashes his million watts smile as he stuns in a sharply cut suit. Ain't no one dapper than Anand, agree? Papa Anil Kapoor looks more than ecstatic as the father of the bride. Anil's energy levels are totally pumped up for the do and it is evident from his characteristic swagger! 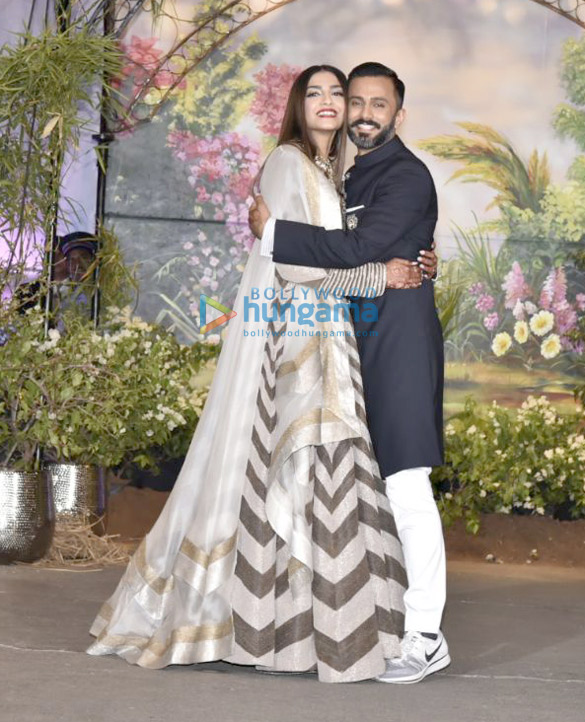 Sonam's uncle Sanjay Kapoor and little cousin Jahaan Kapoor were some of the first ones to arrive. Shatrughan Sinha and Poonam Sinha arrived as well. Sonam’s I Hate Luv Storys Imran Khan was one of the first guests to arrive at the venue.

Kareena Kapoor Khan smouldered in a customized bespoke gold saree by Manish Malhotra teamed with a dangerously plunging blouse. Soft waves and dewy makeup finished out her look. Kangana Ranaut wore a beautiful pink, gold and lavender saree that was gifted by her sister Rangoli. A pearl and jadau choker from Amrapali Jewels with juttis teamed well with nude makeup and sleek hair.

Ranveer Singh ringed in a dapper quotient with his crisp blue blazer, a bow tie black pants and formal shoes. Well groomed hair and that signature swagger topped off his sleek look! Katrina Kaif chose a beige and red Manish Malhotra ensemble with a choker. She sported subtle makeup and soft wavy hair.

Alia Bhatt arrived with her Brahmastra co-star Ranbir Kapoor and director Ayan Mukerji. She looked resplendent in a lime green Sabyasachi Mukherjee lehenga with an opulent choker and a maang tika. She was all smiles as she walked in with her Brahmastra costar Ranbir Kapoor. She finished out the look with subtle makeup and a half-updo. Ranbir donned a Manish Malhotra sherwani with OKeefee shoes. A well-groomed mane and beard added to the charm.

#AnilKapoor greets and thanks the media for their support thru #sonamkishaadi