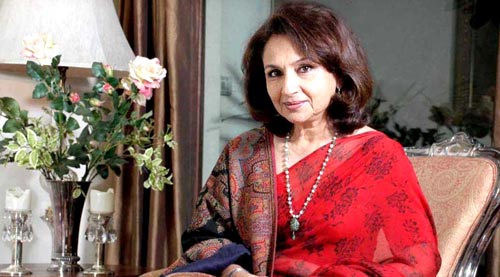 "If I have to select who my friends were in the film industry during my heydays it would have to be Yash Chopra, Thakur Lulla, Tanuja (to some extent) and Shashi Kapoor (to some extent), Gulzar Saab (with whom it was more a respectful relationship rather than pal-pal) and Deven. Deven was a lot of fun. I remember laughing a lot with him. There were lots of happy outdoor shootings with him. Deven directed me in Besharam where Amitabh Bachchan was the male lead. Deven was also my co-star in some of my best films like Devar and Anupama. Deven had also produced Besharam. I remember the film mainly because I was expecting my elder daughter Sabaa-I already had Saif--and we had to complete it before I started showing....There was a bit of dancing in my delicate condition which I had to be careful with. We did a lot of outdoor shooting in Bangalore. Like Hrishida, Deven would joke and keep the atmosphere light even while directing. So shooting with him wasn't tedious. I had fun shooting Besharam. I remember I impersonated a beggar in the film. Amitabh and Deven would constantly joke around. I can't remember much else about the film. If Deven was here he'd fill in the gaps.

I spoke to Deven a couple of times after he shifted residence to Pune. He had changed. He had become quieter. I remembered him as always being funny and filled with laughter. I think in his later years he had become ....different, sober and quieter. Deven had a very prominent role in Devar which also starred Dharmendra. I remember we did a lot of night shooting at Mohan Studios. Dharmendra was very busy those days. So Deven and I would spend a lot of time together. That's when we got friendly. Deven was very close to producer Thakur Lulla who produced Anupama. Deven was also very close to Mr Yash Chopra whom I was close to. So the four of us became very close friends. Thakur and I did the crossword in a leading paper, so that was another connection. With Deven I became closer when he married Dada Moni (Ashok Kumar)'s daughter Roopa...you know, the entire Bengali connection. The fact that Deven got along with my husband Tiger also helped. Sometimes when only one of a couple is friendly with an individual it becomes difficult to keep up a relationship. Fortunately Deven got along famously with Tiger. We had a lot of fun times in Carmichael Road. We remained friends for a very long time.

Deven moved away from the film industry and from cinema. You have to realize there is a life beyond work. There is a lot more to do in life. I am sorry Deven has passed on. Lately he had moved away. I did call him a couple of times. But it wasn't like old times. I will always remember him fondly."