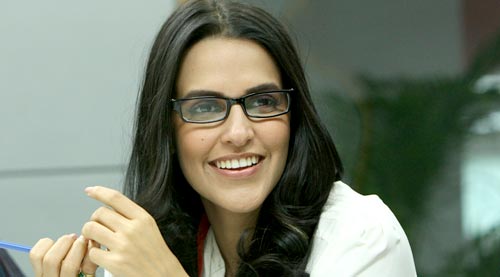 Ungli released last week and even though the film is an ensemble affair, Neha Dhupia - who has acted in a Dharma flick for the first time ever - has managed to find good attention coming her way. As one of the senior actresses around (along with Randeep Hooda) in the Rensil D'Silva production, she has come up with a dignified act. We get into a tÃªte-Ã -tÃªte with the actress who is continuing to land some interesting parts (she made a good impression in her last release Ekkees Topon Ki Salaami too) after being in the business of films for over a decade.

What was that special something about Ungli that made you give your consent, despite the fact that it is an ensemble affair?

I am going to be honest; it was about the opportunity of working with people who are doing extremely well in the industry. It's a huge association by all means, plus the film also boasts of a great script. To be able to work with Rensil was exciting too. I just thought it would be fantastic for me to do this film. Everything put together, I really enjoyed doing Ungli.

The theme must have been enticing too.

Yes, a vigilante film is truly unique for a Hindi film at the least. You feel like there are people out there who are going to make a change and you feel like getting up, joining them and accentuating this change. So yeah, in that sense, this one was a big film for me. I feel good to be tapping that segment of audience which is youth and its nice when you do something for them where you can send a message.

As an actress, did you see yourself being pushed into an altogether different zone?

When I got a call from casting director Shanu for the part, I saw myself playing in a light that no one has seen me in before. As a journalist character, there was a bit of seriousness coming in as well, and I was happy to explore that zone. The fact is that of all the parts I have played, this is the part that I relate to most. For someone who speaks her mind, knows what she wants and is fearless, I was totally for the character, and hence the film. Although I am not a part of the Ungli gang, you see a lot of film through my eyes as well.

For you, it was a complete turnaround from Ekkees Topon Ki Salaami or for that matter Phas Gaye Re Obama.

(Smiles) Yes, that's right. I would like to maintain a chameleon like quality where as an actor I can play a dacoit in one film, step in as a Minister's keep in another and then come back on screen as a journalist. For me, it's a very worthy thing to hold on to, to be truly different with every film that I do.

In the film you also have Randeep Hooda as your love interest.

Yes, Randeep and my chemistry has worked out really well in this film. I would like people to know that Randeep and I started our career together. We faced camera for the first time together for a TV serial Rajdhaani. I played his girlfriend then and I am playing his girlfriend again today. After a decade or so, life has now come back full circle for both of us.

How do you expect life to be from this point on, considering the fact that you have penetrated Dharma camp now with Ungli?

I am proud to be a part of the film. I am not one of those who make a statement like this only after the film is a success. I love the film and I say things as they are. I am very happy that Shanu thought of me for this part. She was courageous enough to think of me to be right for this character; this was a huge foresight that she displayed. You know, the best thing to come out from this film for me is my respect for Karan (Johar) as a producer and Rensil as a Director. There are just some gems to exist in industry and Rensil is certainly one of them.