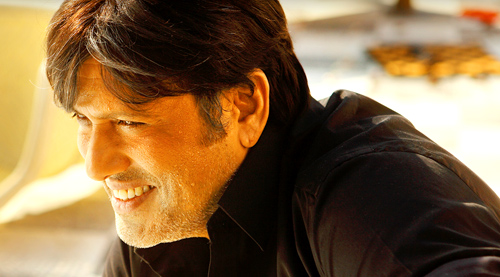 Govinda's 2 back-to-back releases in November have brought him back into the reckoning in a big way. He shares his joy in this tete-a-tete with Subhash K Jha


Shaad Ali's Kill Dil and Raj Nidimoru-Krishna DK's Happy Ending didn't do well at the box office. But you rocked?

Thank you. My mother always taught me to wait for good things to happen. The good things may take time to happen. One has to be patient. Now I know what my mother meant.

But you had to go through an unbearably long period of exile?

That was my destiny...it can't be helped.

In Kill Dil you play a villain who keeps breaking into a dance. Did this villain dance only because you play him?

I didn't give it that much thought. For 13 days I kept on thinking whether I should do the role. I had never played a villain before. And it somehow didn't seem like the right thing to do. So I asked my wife and my children about it. They very honestly told me that I didn't have much of a choice. The kind of roles I wanted to do were not coming my way and I wasn't keen on the kind of offers I was getting. My family told me to take up the offer, or I'll be left behind.

What made you finally say yes to the villain's role?

I remembered once during my days of struggle I was passing in front of Pran Saab's bungalow with my father and he began to cry. I asked him why he was crying and said he had been offered the main villain's role in Mehboob Khan's Aan. 'If I had not rejected that role my 35-30 years would not have been wasted.'

Somewhere that incident came back to you when you were offered the villain's role in Kill Dil?

Yes. I remembered that incident. And my eyes grew moist when I remembered my father's regret. One never knows what destiny has in store. When we have enough work we forget our troubles. So when we are in trouble we should not overlook any work. It's important to do the work that you get with full honesty. This world is run by God and we have very little control over what happens. And if you have little control over the proceedings it's advisable to give your best shot to whatever opportunity comes your way.

You allowed your family to influence your decision?

It has always been like that. I've always worked for my family. When I was doing 2-3 shifts a day it was for the family. When I decided to take the plunge into politics I did it because my family approved. Soon I realized politics was not for me, and I quit. It took people a while to realize I was serious about quitting politics. But I was serious. Because I wasn't getting anywhere in politics.

And your career in films was suffering?

Oh my God! It was a nightmare. My films wouldn't get started because they didn't get any finance. And if they somehow got completed no distributors came forward to buy them. It was like a punishment for crimes I did not commit. Fortunately I've been accepted once again.

In Happy Ending you looked extremely trim and fit?

It's all my pranayaam (yoga). I was supposed to play a heart-throb. So to look the part, the co-directors of Happy Ending asked me to strictly control my diet for three months. When I saw the results I remembered my mother's prophecy. When I was watching Happy Ending I remembered my parents throughout.

Why did your remember your parents during the film?

I remember my mother predicting, 'Chi Chi, when you're 49 you will become a youth once again.' She had predicted that until 49 I'll be caught up in all my professional and family responsibilities and would therefore grow prematurely old. But I'll be able to regain my youth at 49. I also remembered my father telling me, 'Chi Chi, whenever you make a wish the kabuliwallah will come to fulfill your wish.' I continued doing my work honestly.

You played a tantrum-throwing star in Happy Ending? Is it someone we know from Bollywood?

A star is a star. When the world accepts you as a success then nothing else matters. I've a policy for playing all my characters. I make sure they don't resemble anyone I know. I study personalities, not persons. I've seen many personalities like the one I play in Happy Ending. The same goes for Kill Dil. The guy I play may look familiar. But he isn't anyone that you actually know. I played a killer but you didn't see me shoot a single bullet in Kill Dil. Its how an actor brings in elements of innovation that makes a character interesting.

In both Kill Dil and Happy Ending you got the maximum applause when you walked onto the screen?

I've always received a lot of love from the audience. And I've always had space in my heart for as much love as I receive. And I bow to the audience. It's because of their blessings and the blessings of my parents that I've survived for so long.

Not letting your audience and parents down must be a responsibility?

I've never been scared of responsibilities. And I've always treated the film industry like my own family. I was on Kaun Banega Crorepati to promote my films. Bachchan Saab ne bahot samman diya, Main bada khush hua.

I am focusing on doing quality work and controlled work. Earlier I took any work that came my way. Now I'll only accept quality work. I want to thank all my well-wishers. And I want them to give to my next release Abhinay Chakra which is my own production, the same love. Beyond that I'll be careful about my career now. Samay ka khel alag hota hai. My pranaam to all the forces that are now working in my favour.