Ranveer Singh! He is unarguably the dandiest and wackiest actor of tinseltown. With a humongous following, Ranveer Singh is a sheer delight and gets everyone into an utter state of frenzy whenever he steps out. Experimenting with his looks each time, Ranveer Singh dishes looks that make us go through a gamut of emotions ranging from Oh to Wow! With his upcoming film, Gully Boy that has him essaying the role of a struggling rapper from a Mumbai ghetto which is scheduled for a release in February, Ranveer has been painting the town red, garnering all praises for his rapping skills and volcanic energy! Quite rightly, this month’s MOOD is BEAST MODE ON, the cover star of GQ! 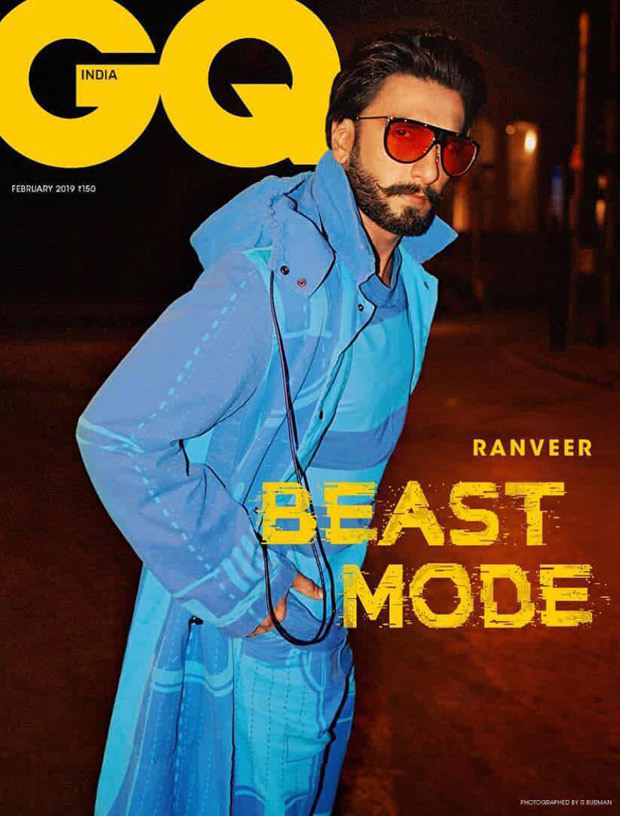 Ranveer Singh unleashes his BEAST MOOD for GQ, turns us into hapless victims!

Ranveer Singh has a rare ability to translate his off-screen quirks on-screen and dazzle the masses with his shenanigans. The photo shoot has been lensed by R Burman and styled by fashion director Vijendra Bharadwaj. Ranveer’s impeccable glamour quotient has been helped by hairstylist Darshan Yewalekar and makeup Arti’s Mahadev Naik. Here is a closer look at the cover.

Ranveer looks dope wearing bright blue separates of a T-shirt, coat and trousers by Craig Green. Sunglasses from Carrera up his beast vibe. A well-groomed mane and beard complete his look.

Gully Boy is a musical film written and directed by Zoya Akhtar, featuring Ranveer Singh and Alia Bhatt in lead roles. It is based on the life of Divine and Naezy (Naved Shaikh), underground rappers from Mumbai. The film is scheduled for a release on February 14, 2019.