Ranveer Singh is all set to begin his film '83 in London. The cast and crew flew to the iconic place to begin the shooting which will go on floor in the next couple of days. The actor began his training in April under the guidance of former Indian Captain Kapil Dev, Mohinder Amarnath and Balwinder Singh Sandhu. Now, while in London, he got to meet several cricketers. 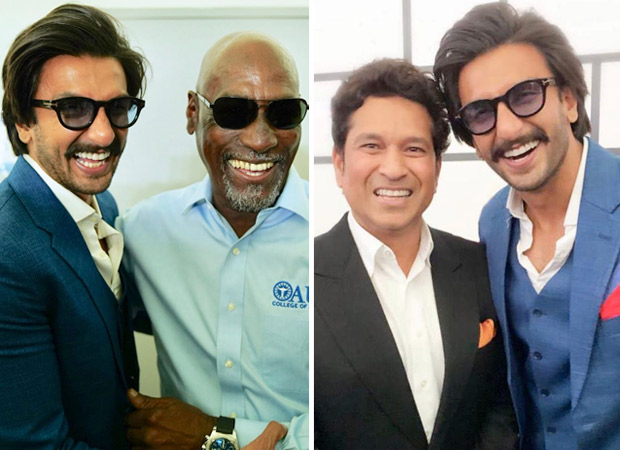 He also met Sunil Gavaskar aka Sunny, who was regarded as one of best opening batsmen and greatest Test batsmen in Test cricket history. Sharing a happy and smiling picture with him, Ranveer wrote, "THE LITTLE MASTER! #sunilgavaskar ???????????? @83thefilm @kabirkhankk #83squad."

Then, Ranveer got a chance to meet former Australia Captain Shane Warne who is widely regarded as one of finest bowlers in the cricket history. "SPIN KING ! #Warnie @ShaneWarne ???????????? @83thefilm #83squad," Ranveer wrote upon meeting him.

Lastly, Ranveer Singh met up with West Indies legendary cricketer Sir Vivian Richards who is regarded as one of the finest batsmen in the history of cricket. He also happens to be designed Masaba Gupta's father. Ranveer Singh wrote, "THE INCOMPARABLE SIR VIV RICHARDS ! ???????? @83thefilm @kabirkhankk #83squad."

Directed by Kabir Khan, Ranveer Singh is all set to star as Kapil Dev in the film. ’83 would be Ranveer’s first trilingual film to be made in Hindi along with two other regional languages, namely Tamil and Telugu. Directed by Kabir Khan, it will bring to light one of the most important events in the history of Indian cricket. The film will be shot at real locations.