Not too long ago, Taapsee Pannu and Diljit Dosanjh flooded social media platforms with sneak peeks into their forthcoming film Soorma. Readers may also be aware that it is based on the real life story of Indian hockey captain Sandeep Singh. Now the makers went on to release the first look poster of Taapsee as hockey player Harpreet. 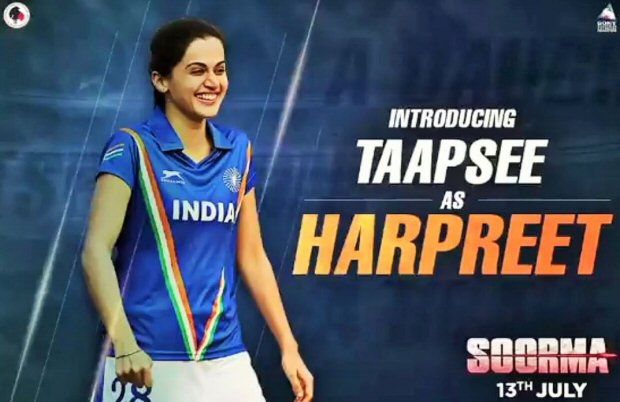 The said poster describes Harpreet, the character played by Taapsee Pannu as a dreamer and an achiever. Her character in Soorma is a daughter and a sportsperson and she is lauded for her brave spirit. Along with the makers Taapsee posted her character poster and wrote, "For my undying love for sports and my country. Meet Harpreet aka Preet – who believes in pushing the boundries. Know her story on 13th July. #Soorma #DontLetThisStoryPass.”

Taapsee had earlier confessed that she has done vigorous training in hockey to get into her role. In fact, she was trained by none other than Sandeep Singh himself before the film went on floors. The month long training has certainly paid off and her fans will get to see her play the game like a professional player in the film.

Soorma is a biopic made on Sandeep Singh the ex-Captain of the Indian National Hockey Team. Singh, fondly known as Flicker Singh, is regarded as one of the world's most dangerous drag-flickers and has given many a golden moment to Indian hockey. In line with the TedX, Sandeep was also a guest speaker at Cambridge University and Warwick University in England.

Directed by Shaad Ali, Soorma will feature Diljit Dosanjh in the role of Sandeep Singh and Angad Bedi essays the role of his brother. The film also marks the foray of actress Chitrangda Singh into production. Co-produced by Sony Pictures Networks Productions and Deepak Singh, the film is slated to release on July 13, 2018.