An anonymous quote says “Willpower is like a muscle: The more you train it. The stronger it gets”. Yet, it is easier said than done, especially in cases when the whole world is asking you to give up or not try. But there are a rare breed of people who have managed to shun all these notions and achieve the impossible through their sheer will. One such legend is the Indian hockey player Sandeep Singh who got back on his feet after facing a shocking accident. The plot is very interesting and can turn out to be a great, inspirational biopic. So does director Shaad Ali manage to do justice to this exciting storyline? Or does he fail in its endeavour? Let’s analyse. 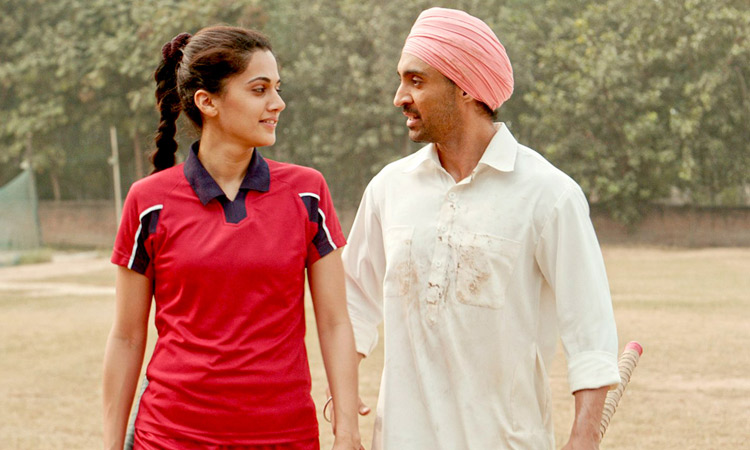 SOORMA is the unbelievable story of Sandeep Singh, his beginnings in the world of hockey, his accident and his comeback that shocked everyone. Sandeep Singh (Diljit Dosanjh) is from the village of Shahabad, Punjab. As a kid, he is enrolled for hockey training under Coach Kartar Singh (Danish Husain). But Kartar's strict ways forces him to leave the training in his childhood itself. When he turns adult, he gets interested in hockey again when he falls for Harpreet (Taapsee Pannu). She is an efficient hockey player and Sandeep decides to try his luck on the sport once again to woo her. Meanwhile, Sandeep's brother Bikramjeet Singh (Angad Bedi) never left hockey and has the potential to play in the national team. However he doesn’t get selected. He returns home dejected but is overjoyed when he realises that Sandeep can do the dragflick, an extremely difficult skill of hockey, effortlessly. Bikramjeet hence takes Sandeep to Patiala so that Coach Harry (Vijay Raaz) can train him. In no time, Sandeep gets selected in the national team. He also is given a job in an airline company. Harpreet is ready to marry him too. However, all his dreams are shattered on August 22, 2006, when he’s traveling in a train and a police officer accidentally fires him on the back. Sandeep survives but he gets paralysed from his waist below. Needless to say, he can’t play hockey again. What happens next forms the rest of the film.

Shaad Ali’s story is quite promising and inspirational. But Suyash Trivedi, Shaad Ali and Siva Ananth's screenplay fails to do justice. It is a bit slow in the first half but on the plus side, a lot of scenes are well written. But in the second half, it is too quick and sans any impact. Suyash Trivedi, Shaad Ali and Siva Ananth's dialogues are witty, sharp and funny, especially the ones mouthed by Vijay Raaz.

Shaad Ali's direction is inconsistent, with the first half executed very well more or less but the second half being a letdown. Post interval, he rushes through the narrative. He also fails to do justice to the romantic track at this point, which otherwise is quite cute in the first half. Also, hockey as a sport is not as popular as say cricket. Hence it was important for him to ensure that the aam junta can comprehend what’s going on in the hockey scenes. But that doesn’t happen. Few developments are not properly explained. For instance, why Chairman Saab (Kulbhushan Kharbanda) is called back is not properly explained. A film like SOORMA should have ended with a punch. But the final match between India and Pakistan is lackluster.

SOORMA is a bit shaky and one realises that in the very beginning. But one doesn’t mind as the first half is embellished with some lovely and dramatic sequences that keep the interest going. One of the most interesting sequences of the film is when Bikramjeet realises that Sandeep is a very good dragflicker and the latter is surprised that he possesses such a rare skill. Then, Vijay Raaz tickles the funny bone with his hilarious one liners. The intermission point is shocking. Unfortunately, the film goes downhill in the second half. The entire process of Sandeep getting back on his feet and on the field should have been the highpoint. Shockingly, director Shaadi Ali shows it in a bland manner within just a song, thereby completely diluting the impact. What also is a problem is that CHAK DE INDIA [2007] is still fresh in people’s minds and has set a benchmark when it comes to hockey related films. SOORMA is nowhere close to this iconic film.

Diljit Dosanjh however saves the film to an extent. He looks very endearing as he romances his ladylove and wins accolades for India. One feels terrible after he meets with the accident. Watch out for him when he has an ugly fight with his brother outside his residence. Taapsee Pannu gets to play an interesting character but sadly her part seems unconvincing after a point. Performance wise, she is very good though. Angad Bedi has a supporting part but is fairly nice and gets to be a part of some important scenes. Vijay Raaz steals the show. Some of his dialogues are going to bring the house down in the single screens! Satish Kaushik (Gurucharan) plays his part with honesty. Khulbhushan Kharbanda and Avtaar Singh (Mahavir Bhullar) are quite lovable. Danish Husain looks very convincing. Jimmy Moses (Lobo Joseph) gets a bit overboard. The real Bikramjeet Singh appears in the film as the villainous Pakistani player Tanveer Alam and is fine. Others do a good job.

Shankar-Ehsaan-Loy’s music is forgettable. ‘Soorma Anthem’ has the anthem like feel but is not well utilitised. 'Ishq Di Baajiyaan' is lovely but is used in too many scenes. 'Flicker Singh' and 'Pardesiya' are strictly okay while 'Good Man Di Laaltain' works as it’s well shot and choreographed. Shankar-Ehsaan-Loy and Tubby’s background score is dramatic. Chirantan Das's cinematography is a bit disappointing. Some scenes could have been better shot. Sharmistha Roy's production design is authentic and same goes for Eka Lakhani's costumes. Farooq Hundekar's editing could have been better, in the second half majorly.

On the whole, SOORMA is laced with a promising plot but the weak execution hampers the impact. The buzz is very low and at the box office, it should do better in the North compared to the rest of the country.

As Soorma completes 2 years, Diljit Dosanjh reveals why he rejected the film initially

“I am humbled by the response to my performance” - Diljit Dosanjh

A must watch .. Amazing performance by all the cast ... Could see the passion in Diljit to deliver…

india needs more movie like this to inspire youth in a phenomenal manner. our youth power should be…