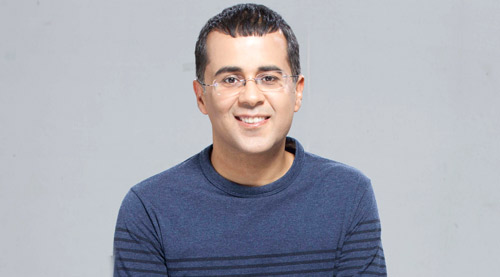 Chetan Bhagat who has been on a roll with his books being adapted to films seems to be on a never ending high. The author whose recent sojourn with Bollywood comes in the form of Kick, for which he has written the screenplay, got into an introspective mood.

Posting his thoughts on his facebook and twitter handle, the author added an image of the same, reminiscing about his journey from being a banker to becoming one of bollywood's most sought after writers.

Sometimes, I look back and wonder, how on earth did all this happen? I remember my days at the bank in Hong Kong, and getting a performance review from my boss, telling me I don't deserve to be promoted. That I lacked something, while everyone else was ok. I remember thinking I need a drink, and wanting to get pissed drunk at his treatment of me. But right then, another though came to me. Let me express my hurt in another way. And so I started a book, about three friends in an Engineering college.

Six books, five films and a hundred columns later, today as I see Kick release in more screens than any other film ever, I wonder. What if I had chosen the path of getting drunk to cope? What if I had not written that first sentence? What if I had believed my boss, who said I lacked something vital? Thank you god for giving me the strength and wisdom at that moment.

All of us are told we aren't good enough. Sometimes we believe it also. But don't. Because nobody, not even you, knows what you are capable of. The criticism will never stop, ever. As I write this, many of twitter must be posting hate tweets about me, telling me how useless I am. But all I want to tell them is this. Buddy, I heard that one before. And it is because I heard that is why I am where I am today.

Congratulations to the entire hard working team of Kick for the bog release today.

And thank you boss. Thank you so much for not promoting me.

Swara Bhasker pumped about starting next…

Milind Soman goes for a 5 km run after he…

Shraddha Kapoor gives a glimpse at her life…