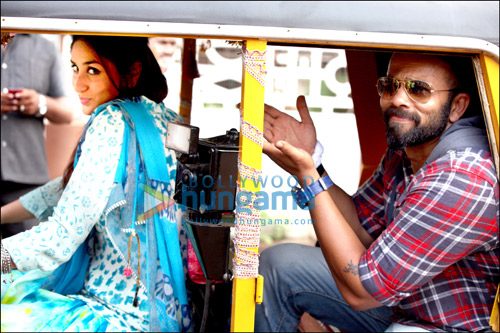 After Kajal Aggarwal in the first installment, Rohit Shetty's sequel of Singham, Singham Returns, will feature Kareena Kapoor Khan in a lively avatar. The actress who will be seen sharing screen space with Ajay Devgn after Satyagraha, will also ride a rickshaw in the film.

Earlier we had given a glimpse of Kareena Kapoor's rickshaw driver avatar and we also got a sneak peek of the same in the recently released trailer of the film. Now, it seems that Kareena Kapoor decided to flaunt her driving skills to the film's director Rohit Shetty. We got hold of this very cute image of Kareena and Rohit, where the duo are seen in a very jovial mood on the set and the actress is seen taking her director for a nice joy ride.

Like her other Rohit Shetty films, Singham Returns too will see Kareena Kapoor doing some wacky stuff. In the Golmaal series we saw Kareena Kapoor riding a bike and even standing on a moving car and now the rickshaw ride. A source close from the production team says," In their very first film, Rohit made Kareena stand on the bonnet of a car. At that time, she ensured that it was being driven by the director himself. In Singham Returns, she has to drive an auto rickshaw and she wanted Rohit to ride in the vehicle with her."

While Kareena-Rohit have come together for Golmaal 2 and Golmaal 3, this time around too, Kareena Kapoor will play the love interest of Ajay Devgn once again in Singham Returns. Just like the prequel Singham, Singham Returns is the journey of Bajirao Singham who strives to bring black marketers, smugglers to justice. The film also stars Amole Gupte and Anupam Kher and it is slated on release on August 15.