What a year it has been for Hindi cinema! The hits and the critically acclaimed films kept rolling out. At the last count 10 films of the year had jumped into the 100-crore league. Not all of them deserved their success. Subhash K Jha picks his favourite films of the year. 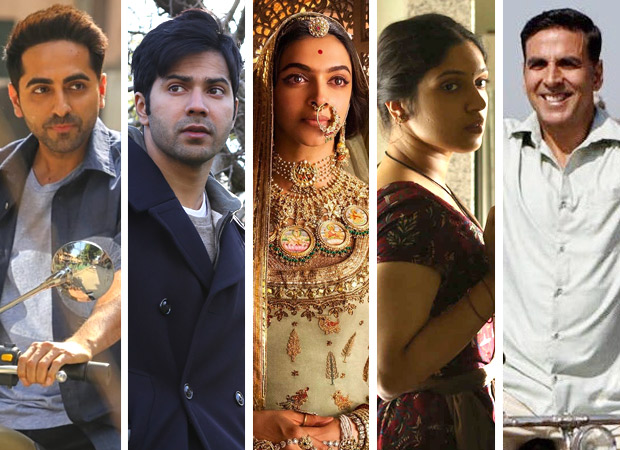 1. Badhaai Ho: An absolute charmer, a delightful exploration of the suburban middleclass and its sexual-emotional anxieties as the matriarch of the family announces her pregnancy. All hell breaks loose. Sophomore director Amit Sharma eschews melodrama and hysteria. The reined-in screenplay gives the characters breathing (and breeding) space. The narrative never breathes down the characters’ neck, allows them to just be. Never before have the people populating a movie-made housing colony seemed so real. The performances were so vivid and endearing I had to go back to them. And to think the director Amit Sharma had earlier directed the potboiler Tevar, best remembered for putting the redoubtable Manoj Bajpai on screen in his innerwear to endorse a particular brand of lingerie. Yuck.

2. October: Shoojit Sircar’s delicately-drawn love story about an annoyingly self-important hotel concierge (Varun Dhawan) and his soft-spoken colleague (newcomer Banita Sandhu) who slips and falls into a coma. Did she give him a hint of her feelings for him before she lost consciousness? This was an audacious and daring premise for a love story. But then when has Sircar ever played the game by the rules? He breaks them with tender care and gives us a romance as wispy and gossamer as Shakti Samanta’s all-time classic Amar Prem, without R D Burman’s timeless songs. This is the problem with romantic films today. The soul may have music. But the music hardly ever has soul. When Varun Dhawan was deeply effective when he was not busy showing us how daring an actor he is.

3. Padmaavat: Despite a fatally flawed script, this epic—yes the only film this year that qualified as one—sailed across to greatness on the strength of its visual resplendence and the power of its director the great Sanjay Leela Bhansali to bring glory to large-screen grandiosity. Bhansali for my money is the best filmmaker in our country today. Every in Padmaavat spoke to us in a language of spectacular resplendence. On a second viewing the performances except Jim Sarbh left me unmoved. I’d have liked to see more of the love story between Ranveer Singh’s Allauddin Khilji and Sarbh’s transgender character Malik Kafur.

4. Lust Stories: This 4-storey treat on Netflix has so much to give, it requires, no demands, repeat viewing. The theme is lust. This orgasmic omnibus opens with the weakest story of the lot. Anurag Kashyap’s ploughs through the sexual escapades of one of the most unlikable female heroines I’ve seen in recent times. Radhika Apte plays the sexually active Kalindi, a college lecturer with the hots for her virgin student Akash Thosar who remains virgin no more after she finishes with him.

Zoya Akhtar’s story sees Bhumi Pedneker blossom into an actress of substance. Playing a house-help who is helping her unmarried single employer (Neil Bhoopalan) with his bucket-‘lust’ Bhumi hardly speaks. Zoya tracks her unspoken movement through the apartment which she knows intimately but can never own, as her employer-lover’s prospective bride descends on the ‘1 BKH’ apartment with her folks, reminding her of her place in the domestic hierarchy. There is a kind of unvarnished elegance in Zoya’s delineation of domesticity .In the third story Dibakar Bannerjee does an Ingmar Bergman-Basu Bhattacharya portrait-from-a-fractured-marriage in the third story where lust is not a predominant impulse.

Desolation is. And who better equipped than Manisha Koirala to project the hurt and wounded pride of a wife who has found comfort in her husband’s best friend’s arms? Bannerjee uses a lot of words to heal wounds in the fractured relationship. Dibakar builds a bewildering wall around the triangular relationship. I found the fourth story in this Lust-omnibus to be the hardest to define. Clearly Karan Johar enjoys the orgasmic beat much more than the other three directors. His story is an unabashed ode to the Big O, though a little broad and tactless in the way it makes the self-pleasuring vibrator seem like a tool of sexual liberation. Sending the warrior queen to the battle field with a sword….It is really not that simple

Still, full credit to Karan Johar and all the other three directors of Lust Stories for opening that door into the Indian middleclass’ sexual consciousness where there lurks a lust for self-fulfilment , seldom explored, scarcely realized. For exploring what goes on behind those doors of middleclass bedrooms this omnibus deserves an ovation.

5. Padman: R Balki’s heartfelt propaganda film on female hygiene is to menstruation what Toilet Ek Prem Katha was to defecation. There is the period film. And then there is the film about the periods. Excellence comes in many packages. But rarely in a small secret package wrapped a newspaper. Sometimes these packages cost Rs 55 and are completely out of reach for the non-urban women of India. One man in Tamil Nadu, who is miraculously a convincingly-transformed North Indian in Pad Man, decided to do something about making sanitary pads affordable to poor women. Balki adopts a simple straightforward linear narrative mode, leaving behind the swag and swagger of Chini Kum, Ki & Ka and the underrated Shamitabh to focus on the man and his mission with a singlemindedness of vision shared in equal measures by the protagonist and the filmmaker. There are passages of keen satire rubbing shoulders with fleeting images of deep contemplation in the supple sturdy and rugged storytelling, all merging in a marriage of Pure Cinema and Social Statement. 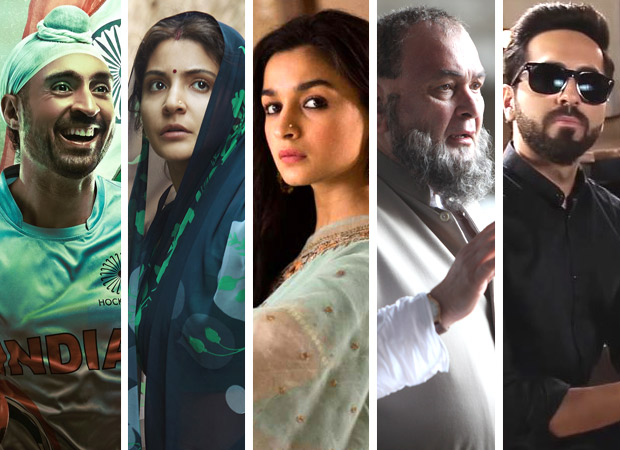 6. Soorma: At a time when supposedly responsible filmmakers are glorifying gangsters, terrorists and sociopaths in ostensible bio-pics, Soorma about the struggles of hockey champ Sandeep Singh to overcome crippling obstacles to claim a name among sports legends, comes as a gust of unpolluted air. This is a film that needed to be made, a story about a man whom future generations need to know about and look up to. Damn, the young need role models from our everyday life not imported super-heroes who can’t save their own egos even as they purport to save civilization from destruction. Diljit Dosanjh makes the character and his struggles look so artless and credible you want to reach into the innards of the plot and hold the protagonist’s hand and tell him, ‘It’s okay. You will be fine. I’ve suffered too.’ In a sequence like the one where Diljit pleads and rages over the phone against his beloved’s seeming betrayal. Dilijit’s gentle control over the swelling emotions is laudatory. If this performance doesn’t fetch Dosanjh a National award, what will?

7. Sui Dhaga: After I saw Sharat Kataria's debut film Dum Lagake Haisha I hoped Kataria won't sell out to the star system .But his second film starred a market -friendly lead star .I hoped Kataria's second film won't lose the charm and innocence of the first. Providentially Sui Dhaga lost none of the delicacy and sting of a tale rooted to the soil, even while providing space to its leads to surrender to their characters .Varun Dhawan surrenders to his character Mauji as though the role was tailor-made for him .Never afraid to look less than heroic on screen, Varun furnishes his darji's characters with a rugged candour. This is an actor and a character who are so sincere to their craft they don't mind crawling on the floor if that's what it takes to stay afloat. Dhawan's performance is filled with a smothered disappointment .it takes his quietly confident deceptively docile wife Mamta to bring out the suppressed ambition in her husband. The aspirational narrative of how Mauji finds his groove with considerable help from his street-wise wife ,works like a charm because all the performers are solidly sincere. But most of all Sui Dhaga wins our hearts because the director never milks the milieu for soppy sentimentality. Nor does he swing the other way to make the middle-class ambience a place to celebrate misery. The tone is constantly energetic yet poised. Kataria is neither awed by stillness nor intimidated by noise. He listens to the heartbeat of the Indian heartland. We listen.

8. Raazi: Though I had several misgivings about the plot which bends backwards to show the traditional enemy as empathetic, this film is finally a brave and sensitive attempt to portray the life of an Indian spy in Pakistan. Raazi is that triumphant film which leaves you with some serious misgivings. The story, as we all know by now, is based on the real events during the eve of the 1971 Indo-Pak war when a valorous young Muslim Indian girl Sehmat decided to cross the border to become wife in a Pakistani family of armymen to gather information for the Indian government. It is an audacious tale. And one waiting to be filmed. As a work of cinematic art Raazi scores very highly, almost rivalling the director Meghna Gulzar’s previous film Talvar. Alia Bhatt lets her performance merge into Sehmat’s moral dilemma. We often see her break down in private. But her grief earns no sympathy from us. Her imagined moral high-ground is not only patronizing to the people whom she betrays it is also unconvincing to us who watch in horrified silence as she murders and double-deals with a defiant impunity.

9. Mulk: It is very hard to believe that Sinha whose earlier credits include fluff stuff like Tum Bin and Ra.One, has actually created this modern political masterpiece which attempts very successfully to humanize a community that has been demonized by some negative elements. And yet Mulk doesn’t take sides, doesn’t make the Indian Muslim community a portrait of injured innocence. What it does do—and full-marks to Anubhav Sinha for writing a script that doesn’t bend backwards to humanize the community under siege—is to lay bare the layers of deception that mars a truly fruitful dialogue between sane rational elements in both the Hindu and Muslim community. When the son (Prateik Babbar) from a Muslim family in the dense by lanes of Varanasi decides to became a so-called jihadi, the ramifications on his family are deep and wounding. It is in portraying the family’s anguish that Anubhav emerges with cinema that’s masterly and timely. There comes a time in the taut narrative when the patriarch of the family is asked to choose between home and safety. Rishi Kapoor making that resolute choice reminded me of Balraj Sahni in Garam Hawa.

10. AndhaDhun: Everything and nothing makes sense in the morally unhinged world of Sriram Raghavan. People kill maim hoodwink and betray the unsuspecting at the drop of a hat. This intricately woven whodunit’s hero is a blind pianist, played with eclectic aplomb by Ayushmann Khurrana. We soon get to know the blind pianist is not blind after all. Though mercifully he remains a pianist right until the bitter battered finale when nemesis is no longer willing to stay huddled in a corner. told with a verve and velocity that the suspense genre has never experienced before in Hindi cinema. So if you’ve been wondering why suspense films in Indian cinema seem so amateurish think no more. Andhadhun is everything that a murder mystery should be. Filled with morally reprehensible characters including an absolutely debauched cop (Manav Vij, dazzlingly slimy) it doesn’t try to impress us with the right moral values. God is on leave. And goodness is on a hunger strike in this film about greed passion and nemesis.

Also Read: #2018Recap: 18 most embarrassing scenes and dialogues in Bollywood films this year