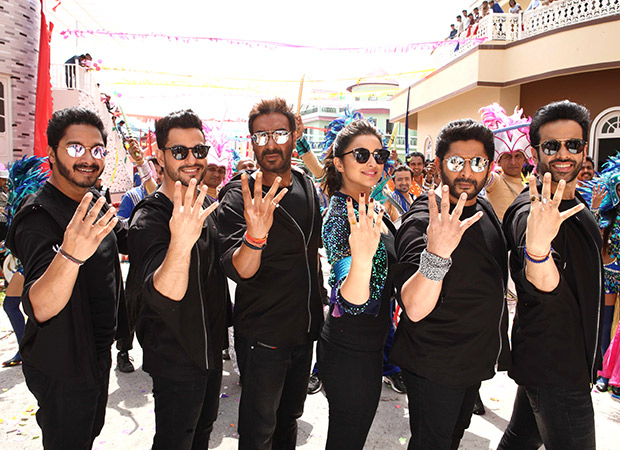 The Rohit Shetty directed film Golmaal Again has been on a roll at the box office since its release last week. The film which is the fourth instalment in the Golmaal franchise and marks the return of the entire gang of boys from Golmaal viz. Ajay Devgn, Arshad Warsi, Tusshar Kapoor, Kunal Khemmu and Shreyas Talpade also features Parineeti Chopra and Tabu entering the franchise. After receiving positive reviews from critics, the film that hit a staggering 4232+ screens (3500+ domestic + 732 overseas) was welcomed with open arms by the audience.

If that wasn't enough, the stellar box office collections of Golmaal Again, appears to have helped alleviate the low earning spree at the domestic box office this year. In this special report, we take a look at the records that Golmaal Again has already set within just four days of its release:

1. 9th All Time Highest Opening Day Grosser
Golmaal Again despite releasing alongside the Aamir Khan starrer Secret Superstar has managed to rake in Rs. 30.14 cr on day 1. However, when compared to the all-time highest opening day grosser, the film ranks 9th after previous releases like Happy New Year that collected Rs. 44.97 cr, Baahubali 2 - The Conclusion that collected Rs. 41 cr and a few others.

3. Rohit Shetty's 3rd highest opening day grosser
Though the collections of Golmaal Again do not manage to surpass Rohit Shetty's previous directorial ventures like Chennai Express that collected Rs. 33.12 cr and Singham Returns that collected Rs. 32.09 cr, it does manage to out beat the director's other ventures to rank as his third highest opening day grosser with a collection of Rs. 30.14 cr.

5. 3rd highest Diwali opener of All Time
Festive releases more often than not promise higher opening day collections, in the case of Golmaal Again, the film which hit screens on Diwali this year has become the third highest all time Diwali opening day grosser. Though leading the list is Happy New Year that collected Rs. 42.60 cr followed by Prem Ratan Dhan Payo that collected Rs. 40.35 cr, Golmaal Again isn't too far being with Rs. 30.14 cr.

13. Second Highest Day 3 of 2017 after Baahubali - The Conclusion (dubbed)
Though Golmaal Again managed to rake in a staggering Rs. 29.09 cr on day 3, the previous release Baahubali 2 - The Conclusion still retain the top slot as the highest third day grosser with a collection of Rs. 46.50 cr.