Golmaal Again Movie Review: Golmaal Again is an ideal fun ride which delivers ample entertainment quotient without any logic. An outandout entertainer, it's sure to light up the celebratory festive mood. 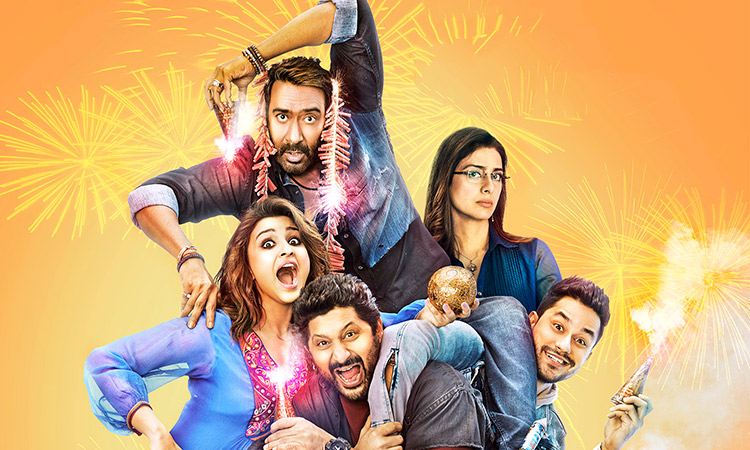 While there have been a lot of comedy films in Bollywood, horror comedy as a genre is rarely explored in Bollywood. BHOOL BHULAIYAA was one such rare attempt and it was loved big time. In recent times, GREAT GRAND MASTI also dealt with horror but it was more of a sex comedy than exactly a horror comedy. TUTAK TUTAK TUTIYA on the other hand never found awareness due to bad marketing campaign and as expected, sank without a trace. Now makers of GOLMAAL AGAIN take up the challenge of giving the audience a combo of laughs and terror. So does it give the audience a great time? Or does it fail to impress? Let’s analyse

GOLMAAL AGAIN is the story of five friends who encounter strange occurrences when they visit their orphanage. Gopal (Ajay Devgn), Madhav (Arshad Warsi), Lucky (Tusshar Kapoor), Laxman Prasad Apte (Shreyas Talpade) and Laxman Sharma (Kunal Kemmu) are orphans who grew up in an orphanage owned by Jamnadas (Uday Tikekar). As kids, they were close to each other but then they became rivals. Gopal and Laxman Prasad Apte separated while Madhav, Lucky and Laxman Sharma went their own way. When they all grew up, they start working with land sharks and their job revolved around getting the plots vacated. This also created further friction among them. But when they learn that Jamnadas has passed away, they decide to iron out their differences and go together to the orphanage to pay their respects. They stay at Colonel Chouhan’s (Sachin Khedekar) bungalow located right next to Jamnadas Orphanage, where their childhood friend Anna (Tabu) is also residing. Anna has a special power – she can communicate with the dead. At the Colonel’s bungalow, Gopal gets attracted to the caretaker Damini (Parineeti Chopra). Meanwhile, Vasu Reddy (Prakash Raj), a builder and a close friend of Jamnadas announces that Jamnadas gave away the land to him where the orphanage is situated. He also says that he has decided to shift the kids at Bengaluru where he’ll provide them with better facilities. Gopal is ghost-fearing person and he starts to see the spirit of Jamnadas’s dead daughter (Ashwini Kalsekar). However, the truth is something else and when the five friends find out, it shocks them like never before. What is that truth and what happens next forms the rest of the film.

GOLMAAL AGAIN is drastically different from the previous GOLMAAL films, not just because of the horror element. There’s a lot more drama and emotional moments than what one would expect. However, it works more or less although few sequences lack punch, especially in the second hour. The first half is 1.30 hours long and neatly incorporates comedy, madness and also the horror bit. One of the highpoints of the film is how Gopal, Laxman and Lucky get possessed and start speaking like Nana Patekar. It’s sure to bring the house down! Also hilarious is the sequence where the five friends fight over samosa. But the best is reserved for the intermission point - the film reaches on a high in this sequence! The second half however gets a bit serious although Pandu’s (Vrajesh Hirjee) sequence provides laughs. The climax is well helmed but audiences might have reservations since they must have ventured into the theatre expecting an out and out comic caper.

Rohit Shetty's story is interesting and a bit complicated thanks to so many characters. But it’s put together well. Yunus Sajawal's screenplay does justice to this complex storyline. The horror is such that it won’t scare the hell out of viewers. At the same time, it’s not even amateur. A nice balance is maintained and that’s definitely praiseworthy. Few sequences however are taken from the previous GOLMAAL films, especially GOLMAAL 3. A section of audience however might not like that as the jokes get repetitive. Farhad-Sajid's dialogues are hilarious and provide laughter. But shockingly, at a few places, they fall flat. This is especially in the beginning portions of Babli (Sanjay Mishra). Rohit Shetty's direction is interesting and it’s good to see him trying to attempt something different. Notice the flashback sequence in the second half when a prominent character is killed and it’s depicted in black and white. Also, the sequence where Lucky, Madhav and the two Laxmans are reading the diary while Gopal is out there fighting the baddies. These sequences are executed very well and it shows that Rohit has evolved.

Ajay Devgn delivers a fine performance and it works, although it’s not something that he has not done before. He’s quite good in the dramatic portions in the second half. Parineeti Chopra has a crucial character and from the first sequence itself, there’s an element of mystery surrounding her character that adds to the fun. She looks beautiful and does a good job. Arshad Warsi is quite nice in his wicked avatar. Tusshar Kapoor impresses a lot with his mute act and also, as said above, he takes the cake in the scene where he gets possessed. Shreyas Talpade leaves a mark thanks to his lisp which contributes to laughter at several places. Kunal Kemmu gets a bit lost in the crowd but nevertheless, gets a chance to show his worth. Tabu is restrained and underplays her part very well. Neil Nitin Mukesh is too good in the negative part. It suits him well. Prakash Raj plays the baddie nicely but his comic timing is brilliant. The sequence where he dances like a madman will be loved for sure. Johny Lever too gives a performance that would provide entertainment. His speech during Jamnadas’s ‘tervi’ is hilarious. Sanjay Mishra is funny but only at places. Vrajesh Hirjee repeats his act and is fair. Mukesh Tiwari, Ashwini Kalsekar, Murli Sharma, Sachin Khedekar, Uday Tikekar and Vijay Patkar are good in their cameo appearances.

The music of the film is strictly average. The Title Track is exciting and same goes for ‘Maine Tujhko Dekha’. ‘Hum Nahi Sudhrenge’ is decent while ‘Itna Sannata Kyun Hai’ is played during end credits. Amar Mohile's background score is exhilarating especially in the post-interval scenes. Bunty Nagi's editing is nothing special. Jomon T John's cinematography is satisfactory. Sunil Rodrigues's action and Rohit Shetty’s action design is appealing although it’s not novel. One has seen it before in Rohit’s own films. Also, the trademark cars toppling and explosion sequences are missing. Swapnil Bhalerao, Tajamul Shaikh and Madhur Madhavan's production design is very nicely done and noticeable. N Y VFXwaala's visual effects are rich.

On the whole GOLMAAL AGAIN is an ideal fun ride which delivers ample entertainment quotient without any logic. An out-and-out entertainer, it's sure to light up the celebratory festive mood. At the box office, the movie has all it takes to emerge as a sure-fire hit although the real test of the film will begin post Monday.

2 years of Golmaal Again: Ajay Devgn, Arshad Warsi and others have a hilarious Twitter exchange

loved the comedy scenes. Rohit shetty and team proved again how they are the best. one more feather…