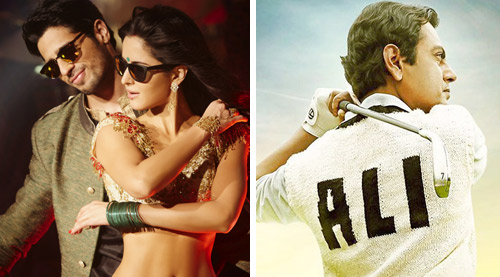 Sidharth Malhotra's last release Kapoor & Sons had taken a box office opening day of Rs, 6.85 crore. An out and out multiplex film, the Karan Johar production had grown from strength to strength with every passing day and emerged as a Superhit. Now the team must be hoping for a similar outcome when it comes to Baar Baar Dekho since the film has opened on the same lines. With Rs. 6.81 crore coming in, the film has taken a decent start, though one had expected a double digit score for the Sidharth Malhotra and Katrina Kaif.

The film has been released at a bigger scale too and given the romantic genre, it had youth becoming a part of the target audience too. The Nitya Mehra film is more of a dramatic affair though instead of being romantic and hence one waits to see how audience laps up to this one in days to come. The film would have to show solid jumps though and at least touch the Rs. 10 crore mark by Sunday.

Even Freaky Ali would have to jump well during rest of the weekend as its opening day of Rs. 2.55 crore is fair, but now needs to grow from this point on. For Nawazuddin Siddiqui this is a personal high since his last solo release Maanjhi - The Mountain Man had opened at Rs. 1.40 crore. However, Freaky Ali has a bigger scale, platform and release going for it, which means the returns have to be bigger too.

The film does offer good entertainment for the masses, especially in the first half, but then the title is very multiplex centric and for that pocket, it would be wait-and-watch scenario for the rest of the weekend.