Just when you think the Bollywood thriller is running out of steam there comes Raid, a film so taut and clenched, so caustic and brimming with political sarcasm that you wonder… where was director Raj Kumar Gupta hiding himself for so many years? 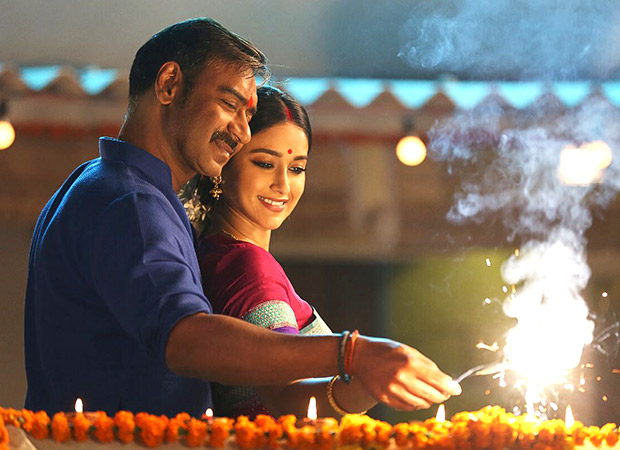 So yes he made Ghanchakkar…We all make mistakes, okay? Not that I minded Gupta’s unexpected swing into zany comedy. But smartly spun tautly narrated political thrillers are his forte. Aamir and None One Killed Jessica had proved it. Raid proves it again.

So welcome back, Mr Gupta. Here’s your deal. An honest-to-goodness income tax officer, played with incorruptible smoothness by Ajay Devgn, who gives away nothing (at least, nothing that we can see on his face) is pitched against a burly swarmy corrupt seedy politician in the hotbed of Lucknow’s politics.

What happens when Amay Patnaik (Devgn) takes on Rameshwar Singh (Sourabh Shukla) on the latter’s home turf? Strongly imbued in the spirit of social reform, the Idealistic Bureaucrat as revisited in this film is a bit of an anomaly. Devgn’s Amay fights that very System which has created him. Idealistic heroes tend to come across as single-minded implacable determined bullies. Devgn is all of this,. It is remarkable how willingly he lets Saurabh Shukla chew up every scene in which they’re together.

Editor Bodhaditya Banerjee slices across the large canvas of characters to capture people in their most anxious moments. It’s a narrative of tremendous tension and nervous anxieties but never surrendering to a frenzied cutting- away of the material to play on the urgency of the moment.

It’s done in the spirit of a pre-determined moral battle, a raider’s Ramayan so to speak, that the plot so doggedly takes on in the pursuit of a Good versus Bad morality tale where the winner often appears to be a loser because he is so one-note in his determined idealism.

Saurabh Shukla has all the fun. And Devgn lets him. It is this spirit of passive resistance that the narrative so virilely assumes that makes Raid a riveting watch. The more Devgn’s goodness shines down on the plot, the more Shukla’s decadent corruption showers its reeking beneficence down on the plot that ironically gets its sustenance not from Devgn’s Rama-like heroism but Shukla’s Ravan-esqe rhetoric.

While Devgn and his raiders of the lost assets pool their talents to create a moribund army of wealth retrievers, the film’s fuel –surcharge comes from the heated exchanges between the bureaucratic hero and the political renegade. The two actors play against one other with brilliant brio.

The supporting cast is largely credible and sometimes remarkably engaging (Shukla’s antiquated yet alert mother is a howl and). But Ileana D’Cruz brought in for the sake of romantic glamour sticks out like a sore thumb with her patently Lukhnowi chikhan-attired performance. Not her fault, though. What can she do when the plot is almost uniformly focused on its frenetic fight against wealth stealth with loads of savage humour and unexpected pauses to consider what makes corruption such a thriving industry in our country.

By the time the raid on Rajaji’s ill-gotten wealth is over, the director has made a darkly humorous telling point on what it takes to call a dishonest politician dishonest.

Your job, perhaps. But hell, someone has to do the dirty job before another Jessica is killed randomly by a wealthy wayward reveller in a bar. Don’t miss Raid. One of its many pleasures is to watch the two principal actors in full control of their characters, even as the director guiding their exchanges, stands back to let the plot grow hot without burning itself out.

It takes a lot of will-power to stand back and let the corrupt steal the thunder from the incorruptible. Raid tells us virtuosity may be boring. But it is still a rare bird worth capturing in the palm of your hand.