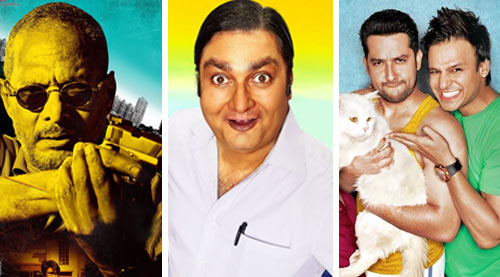 Theoretically, it is the most lucrative script concept: a sequel or a franchise on a successful movie. But how many sequels repeat the crucial names that helped make the original hit movie? Now that's an interesting study indeed!

Take the latest release, Ab Tak Chhappan 2: though the story continues from Ab Tak Chhappan (released in 2004!), nothing about the film is common except for the protagonist played by Nana Patekar! There is no hint of the original producer Ram Gopal Varma, no trace of the director Shimit Amin (it's Aejaz Gulab now), and even the composer of the background music in this song-less film changed from Salim-Sulaiman to Sandeep Chowta.

In a field where rights are all-important, Varma was retained as director in the 2012 flop Bhoot Returns 3D, a sequel in spirit (no pun intended, just something that means a film that follows the overall tenor but neither the plotline nor characters), while the producer was someone else.

Even the Bheja Fry sequel was produced by Mukul Deora and not Sunil Doshi, though the writer-director Sagar Ballary and leading man Vinay Pathak remained unchanged. This was a 'sequence' sequel - of the same lead character/characters put in a completely different story without a plot-wise continuation, like the Munna Bhai series, the Dhoom franchise, Grand Masti or Singham Returns.

Aankhen 2, which however is another 'true' sequel (a continuation from the original plot's ending), has a totally different team but for protagonist Amitabh Bachchan. Though original director Vipul Amrutlal Shah was the brain behind the former 2002 film based on a Gujarati play, the new film is written and directed (though for the same producer Gaurang Doshi) by Anees Bazmee.

Thus, directors-the captains of the ship and the main entities responsible for the success-are freely changed at the producers' will whenever there is a need to capitalize with the simplest way out-a sequel. Of course, the actual change has multiple reasons-creative ennui (at one point, Rakesh Roshan was planning to entrust Krrish 3 to Rakeysh Omprakash Mehra!); lack of will (Priyadarshan refused to make a sequel in principle in the case of Hera Pheri, while his writer Neeraj Vora thought there was immense scope and made Phir Hera Pheri and is now making Hera Pheri 3); a possible lack of dates or creative or financial disagreements (Sangeeth Sivan in Kya Kool Hain Hum, Sachin Yardi in Kyaa Super Kool Hain Hum and now Umesh Ghatge in Kyaa Kool Hain Hum 3); and finally a personal tiff (Aankhen 2, or Dabangg 2 being helmed by Arbaaz Khan, actor and co-producer, himself rather than by original director Abhinav Singh Kashyap. Ragini MMS 2 and Hate Story 2 were more such examples.

Sajid Khan exits Sajid Nadiadwala's Housefull 3 franchise again for personal reasons-because his producer no longer has the same equation with him, and the new film will be directed by writers Farhad-Sajid. Samir Karnik had a face-off with the Deols and so Sangeeth Sivan was brought in to helm Yamla Pagla Deewana 2, a fiasco.

Interestingly, directors who were not involved in a film's sequel, but did some other sequel later, like Sivan, faced flops. Remember Priyadarshan doing Kamaal Dhamaal Malamaal (the disastrous sequel of his own utterly delight Malamaal Weekly after refusing to conceive a Hera Pheri sequel)?

Two more examples: Sanjay Gadhvi had finished his three-film contract with Yash Raj Films when the third film in the Dhoom series went to his writer Vijay Krishna Acharya. And Mahesh Bhatt, though creatively involved backstage in the 2013 Aashiqui 2, was not repeated as director as he had quit direction by then.

Please also note that Aashiqui is the film with the greatest gap between it and a sequel in spirit - 23 years!

A change of cast is almost a thumb rule in a sequel in spirit, while protagonists who were shown 'dying' in the previous film obviously could not be brought back. Also in sequence films, heroines were the first casualty as there are virtually no movies with a heroine being part of the lead characters. However, in a rare case, Priyanka Chopra was repeated in both Don 2 and Krrish 3 in the same role. Kareena Kapoor, like Ajay Devgn, Arshad Warsi, Shreyas Talpade and Tusshar, was a part of Golmaal 3 after Golmaal Returns, playing a different character, while the four men played different characters with the same names and traits!

But sometimes again, lack of dates, a deficit in intention, a plunging career or the mere passage of time led to changes. Riteish Deshmukh refused the third Kyaa Koolâ€¦ sequence because of his present stand about refusing to do coarse comedy. Akshay Kumar is not doing Hera Pheri 3 or Welcome Back, and in the former case at least, the official story is that the plot has been altered to fit in two characters both sharing his reel name to add to the comedy! It is a moot point if this is the cause or effect of Akshay stepping out!

Sharman Joshi too was replaced by Shreyas Talpade in the Golmaal series. Of course, characters are sometimes scrapped in sequels, like that of Ajay Devgn, the conscience-keeper of the three philanderers in Masti refused to be a part of Grand Masti, the ribald follow-up, though according to Aftab Shivdasani, he was to originally feature in it. Rimi Sen, who played Abhishek Bachchan's wife in Dhoom and Dhoom 2 (in a cameo), was never seen in Dhoom 3. This reflected on her limited market status, as the three films came in 2004, 2006 and 2013 respectively!

Hit music being the perennial needs, many sequels kept changing composers out of market compulsions more than anything else, like Anu Malik being dropped in his low phase from the Hera Pheri, Munna Bhai and Kya Koolâ€¦ series. But in a rare case, he is back in Hera Pheri 3, even doing the entire film though in the original, one song was done by someone else!

Vishal-Shekhar claim that both the Golmaal sequels came to them but they were too busy to accept the assignments, that were done by Pritam. On the other hand, Pritam preferred to remain loyal to his movies, to the extent of foregoing Ek Tha Tiger for Dhoom 3. After all, by sheer dint of talent and hard work, the composer has been retained also in the Race, Once Upon A Time In Mumbaai and Pyaar Ke Side/Effects sequels as well.

Shilpa Shetty says she is jealous that she…

Vince Vaughn confirms he and Owen Wilson are…

As No Entry completes 15 years, Celina…